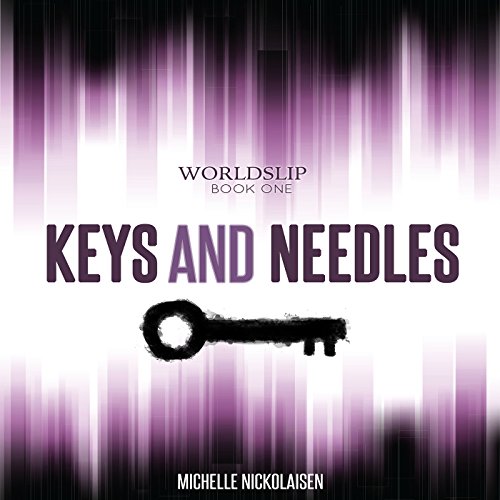 Tania was just another coddled teenager, until the Slip changed everything.

When supernatural forces invaded our world, she found herself with unbelievable abilities that left her ostracized, hated, and Marked. Years later, living on the fringes of society, Tania and her exiled elf roommate Logan are happy to be left alone. But her foreboding dreams have other plans....

In her nightmares, she sees a mysterious hooded figure ripping children from their families. When her dreams start coming true, Tania and Logan must set out on a dangerous mission. One that could take them beyond anything they've ever imagined. One that could get them killed.

Keys and Needles is the first installment in a dystopian urban fantasy series that asks how things would change if the world of folklore collided with ours. If you like snappy dialogue and fast-paced plots, then you'll love Nickolaisen's intriguing world.

Buy Keys and Needles to start the dark and enchanting series today!

What listeners say about Keys and Needles

Always great to read something written by a friend and fan. Michelle, this is a fabulous story. can't wait for more! <3 well done.

What did you love best about Keys and Needles?

I loved how the characters in Keys and Needles were relatable, interesting, and all had their own reasons for acting how they did. Each character had their own voice, and I found myself looking forward to when I would see certain characters again. The lore within the story was also really intriguing.

My favourite character was the lead, Tania, because it was so easy for me to put myself in her shoes, and her thoughts were fun. She's sarcastic, spunky, stubborn, and intelligent, without being contrived or too over-the-top.

What about Ulka S. Mohanty’s performance did you like?

Mohanty's performance was fun, interesting, and very easy to listen to. She slightly alters her voice for different characters, but doesn't go overboard on voices, which really suites the dark mood of the book. She is very well-spoken and has a great voice.

Tania made me laugh out loud several times with her snarky comebacks and trains of thought.

The actual writing is very well done, and exciting to the point where I binged the whole book in a matter of a couple days. I couldn't wait to find out what happened next, and I still can't! Eagerly awaiting Book 2.

I called this a cross-genre tale because it's part fantasy but also part Post-Apocalyptic and a little dystopian too.  There were elements in this that people who enjoy any of those stories would enjoy.  Sure, there were times that it was deeply fantasy related, but at that point, I was so invested in the book that it didn't bother me at all (I'm not a huge fantasy fan).

The pacing of this book was what really did it for me.  Nickolaisen could have tried to pull this book into a much longer format, but it didn't need to be.  All the details needed to read and understand the story were already here and it flowed really nicely.

Honestly, the main character was easily my favorite part of this book.  She was feisty and a little reckless.  It's fun to read a character that you're really not sure what she's going to do next.  I always felt like I had to be on my toes while reading this book.

Keys and Needles was a really interesting book filled with lots to enjoy and I'm glad that I took the time to read it.  Nickolaisen can really write and I'm definitely intrigued to see what else she comes out with.

The narration was done by Ulka S. Mohanty whom I thought did a really nice job.  She had one of those voices that allowed you to believe that she was the same age as the character she was reading.  I already mentioned the pacing of the book and how much I enjoyed that, but Mohanty definitely helped with this -- keeping the book going from scene to scene and giving this book life.

I received a free copy of this book. It has not affected my review of my opinion.

If you enjoyed this review, please vote for it! Every vote helps. If you'd like to see more books like this please check out BriansBookBlog DOT com.