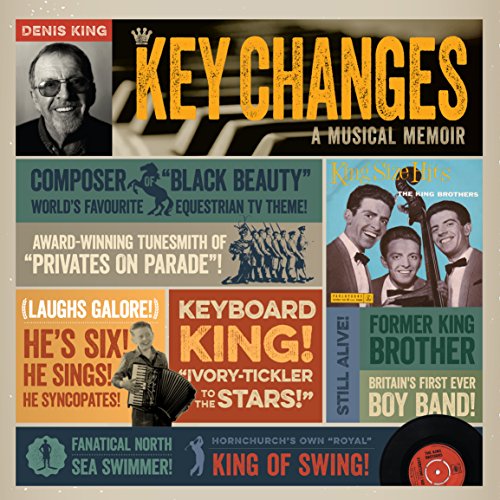 Key Changes is a highly entertaining, frank and personal account of the highs and lows of show business, from post-war Twice Nightly Variety to the present day by renowned composer and performer, Denis King. Known as a brilliant anecdotalist, King himself reads his memoirs which are funny, poignant and eye-opening; he also illustrates them with his own piano-playing and personal sound archive.

In the 1950s and early 1960s King was a member of Britain's first-ever boy band, The King Brothers. Since then he has composed over 200 TV themes, including ITV's award-winning The Adventures of Black Beauty, and has collaborated with numerous theatre legends to write more than 25 stage musicals - Privates on Parade among them.

His career has encompassed every aspect of show business, performing to producing and composing; and he has experienced success alongside disaster and betrayal. The artists with whom King has worked read like a Who's Who of British and American stage and screen: Jimi Hendrix, the Beatles, Tony Bennett, Nina Simone, Howard Keel, Sammy Cahn, Albert Finney, Dame Edna Everage, Maureen Lipman, Elaine Stritch, Julia McKenzie, Dudley Moore, Jimi Hendrix, Ronnie Corbett, Frank Sinatra, Judy Garland... and many more.

Key Changes is not just a potted history or a lengthy name-drop. It is a funny, intimate portrait of the grind as well as the glamour in what many outside the entertainment industry assume is a charmed way to earn a living. And indeed, according to King, it often is.

Very funny. If you like Bill Bryson and you like music and theatre you will love this.
There is a paperback version but I really enjoyed the audio version with its musical clips and hearing Denis King reading it himself made it more personal and added authenticity. A really fun book. Very enjoyable.