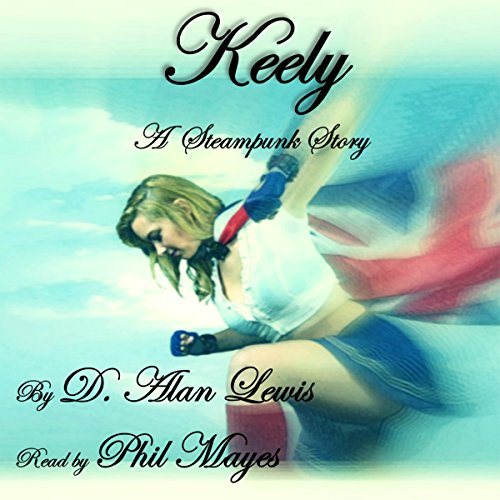 Crashing into the streets of London, she fell to an Earth under siege by a mysterious race known as the Otherworlders. But as foreign as the aliens are, so is she to those who find her.

Thomas Laybourne, a tinker and weapons designer, finds the unconscious star girl and takes her back to his flat. Aided by his friend, Doctor Hunter, and a grumpy clothier named Mattie, he begins trying to determine who she is and why she has chosen the darkest days in human history to arrive.

With most of the world under alien control, only Britain remains as the vestige of human resistance; but the end is approaching, unless Laybourne's latest weapon can stop them. As he finishes up the weapon, his attention is drawn more and more to the beauty and amazing powers of the star girl.

Can they stop their advance and save the empire in time? Or is humanity destined to end beneath the dark clouds of the aliens?

What listeners say about Keely

This was another short listen by this author who has the knack to put a lot into a short time frame. This was a very exciting action adventure full of thrills as the author takes you on a journey of supernatural meeting humans. Aliens have taken over London and are working on taking over the world. They have blocked out the sunlight for the most part leaving nothing but black clouds. As the humans try to find a way to get back their country a lady comes into their lives. Where she came from and how she acts if very much a mystery, they are shocked to see all that she is able to do.

It is hard for me to pick a favorite character there are so many that grab you and pull you in. Keely is a wonder and a thrill to picture from the way she dresses to the way she carries herself. Thomas is a sweet nerd who is a delight as he designs weapons to help take down the aliens. Doctor Hunter is a very nice sweet man who does his best to help Keely find her way and learn of the country she is in. Mattie I just loved her attitude but I think she is more a sweet old lady who is lonely.

I loved Phil Mayes accent he was a delight to listen to. I thought his tones were great, his emotion outstanding. He really made you feel each emotion of all the characters. You had no trouble knowing who was speaking whether it was male or female. You could hear him swallow from time to time but it didn't take away from the listen. There was no background noise and his tones were even throughout. If he took a break you could not tell. I look forward to listening to more audios from this narrator.

The author gives you a wonderful exciting, thrilling read/listen that was a delight. There wasn't a character that I didn't like. His story telling is outstanding as he pulls you in and takes you to another place and time. The only thing I would have liked to have known was more about Keely. Where she came from and why London, what does she really expect the human to do. Is she friend or not? I thought the author filled in the rest of the story very well never leaving you guessing. It is so hard to put everything that needs to be told in a short story but I feel this author does a wonderful job of it. I am looking forward to listening to more audio from him.

Great story brought vividly to life by the narrator!

It had a great pace, never getting dull! From the airships to love story that happens between Keely and Thomas, I loved it all!!!!

His english accent was lovely and he did a great job with distinguishing the characters!

It was imaginative and interesting. The writer was creative and the narrator was the perfect choice. Worth the buy and the listen.

Keely is a fascinating story about a super-powered woman plunging to earth amid an alien assault. Lewis does a great job building the sci-fi world of this story and then dropping this unexpected element into the mix. His narrator is enchanted by Keely's arrival and her mysterious powers, but also concerned about her safety. It's almost more of a love story than a steampunk action yarn, which is what gives this a unique spin.

What does Phil Mayes bring to the story that you wouldn’t experience if you just read the book?

Phil Mayes does an excellent job narrating the audio version of this story. His enunciation is clear and well-acted.

I was entertained but a bit restless for more action, which is what you would expect from a more traditional steampunk adventure.

More than I expected.

Though it is less than a full length novel, the author captures the times, the place and most of all the characters, brilliantly. I was captured initially by the narrator, whose style and pace are excellent and who adds depth to the author's narrative. Then the story itself had me hooked by the end of the first few sentences. An adventure with romance and great storytelling. I won't give anything away because you deserve to enjoy it as I did. I will say this, begin it when you have to time to spare, then sit back and expect to not be able to stop listening once you start. I had a truly great time with it.

The girl who fell to earth

What did you love best about Keely?

It was an interesting take on the alien invasion theme. This should be followed up with more exploration of the secondary antagonist, the xenoforming that the aliens have already done. But even though it is short is is action packed and I feel it came to successful conclusion. It leaves you wanting more, not disappointed that nothing is resolved.

I think that Thomas is a very well thought out character who allows us to discover Keely as he grapples with her alien nature.

The story is tight with great amounts of information revealed in short description that flow with the action.

My sister loves it!

It is my sister who listen to the audio first. She told me that it is a good one! Listening to it now and incredibly terrific! Can't wait until the end of the story!

It is a well-written action packed with awesome story line. I really love Keely as the key character, she is enigmatic and a countless lead. I enjoyed this story thoroughly. It was a great story from first line to the last, Keely after she falls from the sky. Very enjoyable.

A different idea is presented by this author in this story. It is the idea of the girl dropping to Earth among the crisis of alien defeat fascinating and charming. It is a fun, a good quest, sometimes funny, sometimes loving, and sometimes electrifying as well. A complete story.

This book will not let you move any other way it’s my challenge. The Kelly is the only savior of the earth that can make right again what man had destroyed. Listen to this book and enjoy this author’s imaginary which is out of this word.

This is my first story I have got of D. Alan Lewis and found it interesting and thrilling. In my opinion D. Alan Lewis is an excellent short tale of adventure and romance. The story has a great plot, excellent characters and impressive scenes. Liked it.

I am Happy With This

I am so happy to have such an interesting story. Keely is such an appealing story, and the narrator has done an excellent job as well. I would really love to see more books from this author, showing how other places around the world handle the situation. This is recommended by me.