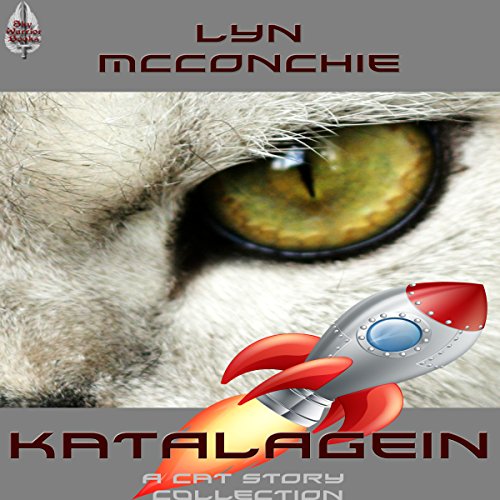 By: Lyn McConchie
Narrated by: Mark Barnard
Free with a 30-day trial

Welcome to Katalagein. I've been writing short stories now for 25 years, and they've been published for 24 of those. I also write books, but that's another tale entirely. I live with a cat, or rather, as he'd see it, he graciously permits me to live with him. As a result, and over the years, a number of my stories have featured cats, and some even featured cats that were real - although their adventures may have been exaggerated, but then again....

Cats think that humans exist to keep them warmed, fed, cuddled, and loved. Humans exist to open doors, cat-food tins, and cartons large enough for a cat to curl up in. They exist to rescue the cat, defend the cat, and protect the cat. Our opinion, that cats exist to keep us company and catch mice, doesn't begin to describe the relationship of the average cat with their human.

Humans are stupid too, in the estimation of the same cat. No tail, no whiskers - no brains. Certainly our language abilities, compared to feline-speak are incredibly limited. We come in useful for some things but it can take so long to get the essential demand across, that I think that my current cat, Thunder, assumes I'm something of an idiot.

However, I've always enjoyed writing cat stories, some have even won awards, and using my imagination I've been able to explore cats and their elements in a way that has opened doors to worlds previously unknown to me - and not always as expected either. So follow me into the many worlds of cats, but watch out, because where ever cats go, trouble follows!

What listeners say about Katalagein

Needs to be saved!

Listening to this book was difficult. The reading by Mr Barnard was so off, that it was difficult to fully appreciate the stories.
I would occasionally stop, think about a line or paragraph, imagine it read by someone else, and realize that it was well written but poorly performed. This detracts from the overall experience of the book.