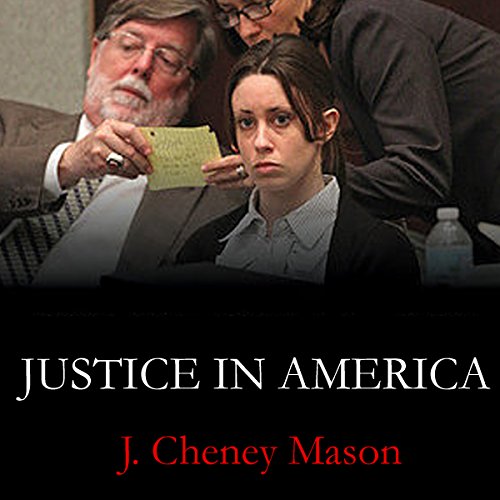 The Casey Anthony trial of 2011 is estimated to have drawn the television and reading attention of no less than a quarter of a billion people from around the world. In Justice in America, Anthony defense attorney J. Cheney Mason, who was brought in to save the case, asserts that the jury got it right, and that America, the media, and the public blinded by the nightly lights, got it all wrong. His is the final chapter on the Anthony trial which ignited, mesmerized, and inflamed the public in a way not seen since the O. J. Simpson trial. It became the trial of this century and a piece of legal work destined to be studied for decades to come.

Attorney Mason answers the remaining questions left by previous authors with a play-by-play account of what was happening behind the scenes with Casey. He shares never before revealed media bias and enough case secrets to make listeners re-examine their conscience and the quick path to judgment and personal conviction of Anthony. A must-hear for anyone who followed the trial; for anyone interested in justice, and absolutely required for anyone pursuing law or criminal justice as a life passion.

What listeners say about Justice in America

wast of money.
I struggle to read this book the worst story teller ever.
save your money

the narrator was awful! ruined the book. It's like he was reading it while in a dark room running on a treadmill

What would have made Justice in America better?

Change the narrator. It baffles me that Mr. Colasurd has narrated other books.

What was one of the most memorable moments of Justice in America?

The parts where the narrator refers to the book as "Justice On America". It happens multiple times.

What didn’t you like about Don Colasurd Jr.’s performance?

His stilted delivery. The fact that he pretty much ignores punctuation. That he mispronounces and mumbles through a bunch of different words multiple times. I had to repeat what he was saying in my head sometimes to make sense of it. It was very distracting.

I might actually buy the hardcover or ebook version of this book because the story was really interesting. There were a lot of things about the Anthony Case in this book that Jose Baez didn't go into in his book. If were Mr. Mason, I'd be very upset about what the narrator did to my book and demand that it be redone by someone else.