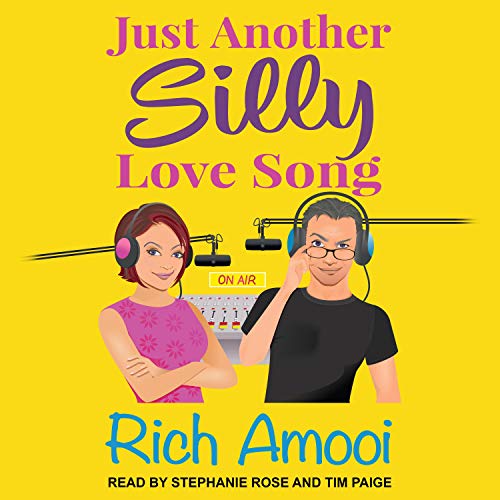 By: Rich Amooi
Narrated by: Tim Paige,Stephanie Rose
Try for $0.00

Two rival radio personalities. Lori Martin is a positive and upbeat DJ, known for playing love songs and dedications. Ben Baxter dishes out no-nonsense, in-your-face relationship advice. Total opposites. Never in a million years would they want to work together.

Fired for losing her cool after her boyfriend breaks up with her on the air, Lori surprisingly receives a job offer for the coveted morning show at the radio station across town where Ben works. She thinks she's replacing him but finds out they want to team up Lori with her archenemy to set the air waves on fire and boost ratings. Financially strapped, she can't turn down the job.

While their on-air fireworks and explosive chemistry make for great listening, what in the world will happen after work hours?

What listeners say about Just Another Silly Love Song

This is the best Rich Amooi book I've listened to thus far! The smart and funny dialogue between the main characters, as well as the romantic chemistry, was excellent. 5 stars all the way!!

I love this authors books. I really liked this one since it had a double love story in it !

If you are looking for a book that will make you smile, this is the one. It was a wonderful story and the performance was great also. There is a station in Cincinnati that has a couple as portrayed in this book. They are just as fun to listen to as Lori and Ben.

My Favorite One So Far

Oh my goodness, I couldn't stop listening. This book is even better than It's Not PMS It's You but I still love that book too. Rich Amooi books keep getting better and better and funnier. Who wouldn't want a grandparents as funny and awesome as Ben and Lori's. Lori reminds me of the way Rich Amooi describes his wife being a kiss monster. I couldn't stop listening and laughing. I can't wait for Rich Amooi's next book. I keep hoping he'll do Audiobooks for There's Something About a Cowboy and Madam Love, Actually because all of his Audiobooks and books are amazing and I own copies of every book he has written and all his Audiobooks too. I can't wait for the next books to come out!!!! Best Author Romantic Comedy author ever in my opinion because I Know whatever book he writes will be awesome!!!!