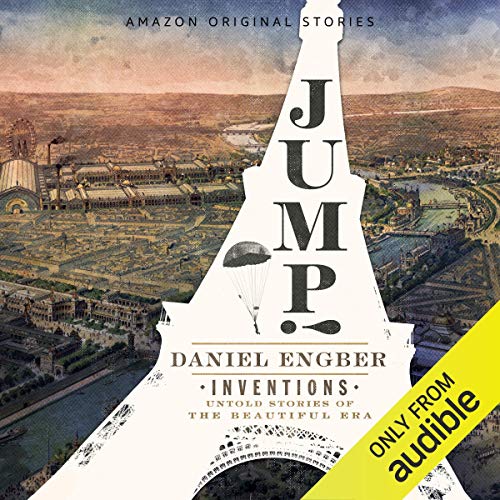 By: Daniel Engber
Narrated by: Amy McFadden
Try for $0.00

In the first few years of the twentieth century, inventors discovered how to soar into the sky. This breathtaking true story is about two men who, on one fateful weekend, tried to show the world a way back down.

It was early February 1912, and Franz Reichelt, a Paris tailor, and Rodman Law, a self-described “professional jackass” from New York, were poised, respectively, on the Eiffel Tower and the Statue of Liberty, ready to deploy an experimental parachute. In bat wings and bundled linen, they were almost certain their contraptions would work. Here is the tale of their inspirations and their pluck - and what happened next.

Jump! is part of Inventions: Untold Stories of the Beautiful Era, a collection of incredible true stories from the belle epoque, an age of innovation, daring, bluster, and beauty when anything seemed possible. Each piece can be read, listened to, and marveled at in a single sitting.

At just over an hour this short story is included as an Amazon Prime, Kindle Unlimited, or Audible Plus membership benefit. These make great lunch break (or while folding laundry) listens.

Obviously, this isn’t intended to be a comprehensive biography of either Reichelt or Law. Instead Engber uses newspapers, diaries, and interviews to share an interesting tale of two men who sought to keep gravity from ensuring death. Their motivations and personalities were quite different and the juxtaposition of their lives and time in history is compelling.

Note: While I listened to the audio, I also “read along” with the ebook. I highly recommend this as there are numerous photographs that add to the experience.

I’m a fan of Amy McFadden and she’s a great choice to narrate this story which is at turns humorous and poignant.

Entertaining from a historical perspective

If you're into stories with historical context then this story fits the bill. Its almost like there's a couple of story lines here revolving around the invention of the first parachute. There's a man who keeps raising the financial bounty prize for the first successful parachute invention and this story relates to a couple inventors that tried.

I was a able to listen in one sitting with just over an hour to kill. History is kind of a hobby for me so I enjoyed listening to this. I know non fiction story lines are not everyone's cup of tea but this one peaks your curiosity when these guys actually "jump". Well Narrated.

I expected to like this more than I did but there are still several good parts. I found the narrator to be clear and easy to listen to. I did think the story of the two similar but different pioneers was quite interesting. Somehow it didn’t quite hang on together to me as a compelling listen. Even though it’s quite short, I had to force myself to get through it. But I was glad I did.

Fascinating glimpse into the start of parachuting!

Short read/listen but definitely interesting and worth your time. Not sure why the author picked the specific characters to focus on as it seems there were many others whose stories could also have been told. Nevertheless, as long as you don't expect a thorough review of the early days of parachuting you won't be disappointed with this book.

This is probably my first Audible story. It's great listening to the narration and learning about the origin of the parachute.

Jump they Do with Consequences

This was the fascinating story of two early century daredevils, testing early forms of parachutes in the turn of the century. One brave German jumping from the Eiffel Tower in France and an American jumping from buildings and planes in the US. While certain facts are known, the author takes poetic license with some of the imagined recollections. An entertaining read. I read this book using immersion reading while listening to the audiobook. Amy McFadden's narration was brilliant.