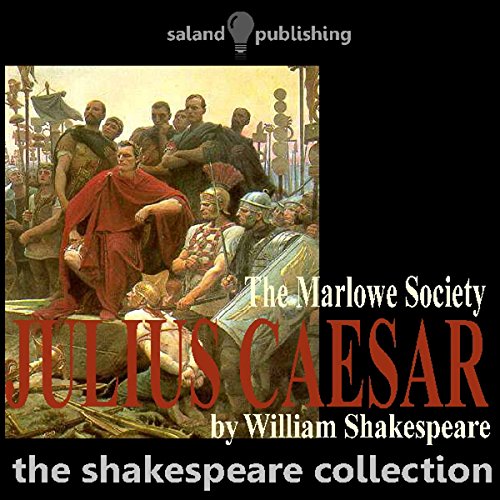 By: William Shakespeare
Narrated by: The Marlowe Society
Try for $0.00

great performance, but not useful as a companion

What disappointed you about Julius Caesar (Unabridged)?

This problem may be with the way the recording was handled, but there was no way to differentiate the acts and scenes. Therefore, if intended to go straight to a particular part of the play, I had to listen to the entire audio, and find it on my own.

If you’ve listened to books by William Shakespeare before, how does this one compare?

The listening experience as good.

Would you listen to another book narrated by The Marlowe Society?

What character would you cut from Julius Caesar (Unabridged)?

As mentioned before, the audio selections should be separated by acts and scenes, so that people reading the play along with the audio can find the sections easily.

For use in a HIgh School classroom

Would you listen to Julius Caesar (Unabridged) again? Why?

I listened to examples of all of the Julius Caesar audio productions and I chose this one. Unlike some of the productions, the actors speak clearly and with emotion. I teach Julius Caesar every time I have tenth grade students, so this will refresh my mind and help me to get ready to teach it again.

What was one of the most memorable moments of Julius Caesar (Unabridged)?

The conversation between Brutus and Cassius was one of the most memorable moments of this production of Julius Caesar. Brutus has a clear, low, voice and Cassius has a slightly nasal, rather sinister voice. I think this scene works well and helps to reveal each character's attitude toward one another and toward Caesar.

Which character – as performed by The Marlowe Society – was your favorite?

I think Cassius was one of my favorite characters as performed by the Marlowe Society.

If I were to make a film of the book, I would call it Deception.

Again, I believe that the actors speak clearly and with emotion. The transitions between scenes are also clear. I believe that this is a good production for a listener to really understand Julius Caesar.

There's great historical references and the characters that this work deals with are some of the greatest from throughout history (Roman history in particular, which is certainly one of my favorite subjects) but overall I found this to be a snooze-fest. The audio book was dull. The narration was poorly done. And in many areas of the book, I really had to strain to try to hear and understand half the stuff they were saying, thus ruining, what was once a classical read.