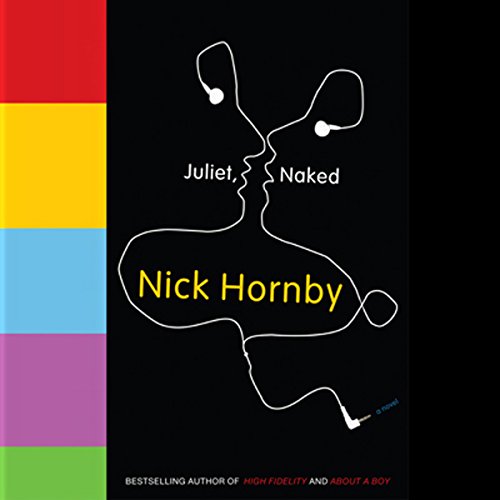 From the beloved New York Times best-selling author, a quintessential Nick Hornby tale of music, superfandom, and the truths and lies we tell ourselves about life and love.

Annie loves Duncan - or thinks she does. Duncan loves Annie, but then, all of a sudden, he doesn't. Duncan really loves Tucker Crowe, a reclusive Dylanish singer-songwriter who stopped making music 10 years ago. Annie stops loving Duncan, and starts getting her own life. In doing so, she initiates an e-mail correspondence with Tucker, and a connection is forged between two lonely people who are looking for more out of what they've got.

Tucker's been languishing (and he's unnervingly aware of it), living in rural Pennsylvania with what he sees as his one hope for redemption amid a life of emotional and artistic ruin - his young son, Jackson. But then there's also the new material he's about to release to the world: an acoustic, stripped-down version of his greatest album, Juliet - entitled, Juliet, Naked.

What happens when a washed-up musician looks for another chance? And miles away, a restless, childless woman looks for a change? Juliet, Naked is a powerfully engrossing, humblingly humorous novel about music, love, loneliness, and the struggle to live up to one's promise.

“Hornby seems, as ever, fascinated by the power of music to guide the heart, and in this very funny, very charming novel, he makes you see it matters.” (The New York Times Book Review)

Featured Article: 20+ Creative Quotes About Art to Leave You Inspired


Art is as much a part of human nature as breathing. Since the dawn of time, humans have taken to creating in various forms and schools, with all manner of reception. Whether beloved or highly critiqued, art is a fixture of culture and what it means to be alive. To inspire your creativity, we’ve compiled a list of the best quotes about art. From painting to dance, art has been enriching the world for centuries. Get inspired to share your passion with some amazing quotes.

What listeners say about Juliet, Naked

I thouroughly enjoyed every bit of this book. The narrators were all fantastic. The characters were so well drawn I felt like I knew them all by the end of the book. It was witty and funny and serious and sad all at the same time. It was an all around excellent effort on Hornby's part. Loved it. Can't say that enought. I'm going to check out his other work now too.

So this is how good an audiobook can be

I'm not reviewing the content of the book, quite excellent, especially if you are a Nick Hornby fan, but rather the recording. It was brilliant using the three narrators. I also enjoyed the musical segue ways.

Missed the characters terribly after finishing

I liked this novel a great deal -had never read anything by Hornby before but it made me want to read other things by him- and the narration with the English and American accents makes it even more enjoyable. I felt the author understood and explained the different characters very well, especially the woman (which surprised me) and the musician. There were many amusing parts, the dialogue and the feelings and motivations of the characters felt true, and I almost felt I became friends with (or at least would want to, in the case of the woman and the older man-musician) the characters. At the end, I wished the book could have been two or three times longer, so as to not have to say goodbye to the characters.

If you're a fan, this is one of his very best.

The three narrators did a wonderful job of exposing the listener to the individual minds of the main characters. If you enjoy Nick Hornby's work, I would highly recommend Juliet, Naked.

What a fun book!

I'm so glad I discovered the offbeat humor of Nick Hornby. I even laughed when I tried to describe it to friends. What fun!

I have read almost everything by Nick Hornby and I am a huge fan of his but this is by far the worst thing I have ever read/listend to by him and in recent memory.

The plot involves a washed out c-list rock musician, a superfan of the musician, and the superfan's girlfriend. The book lacks the humour, character, and cultural references of his other books.

The only real interesting thing I found is the use of wikipedia as a narrative device explaining the career of the fictional rock star.

The narration is fine. I hope Hornby's next book is an improvement on this one.

Enjoyed it all. I know people like each of the main characters in the book - they felt very real and the writing was insightful.
Readers were fantastic - they really pull you in and make you think you are listening to the real characters.

This book was about nothing.absolutely nothing. Don't read it. Just watch the movie instead. Save yourself.

This book got me back into reading. Loved every minute of it, however I feel like Hornby got distracted midway through the book and lost track of things. The last quarter of the book lacked plot and climax. I'm going to give High Fidelity a try. I'm a huge fan of this writing style, and I thoroughly enjoyed the omniscient point of view.