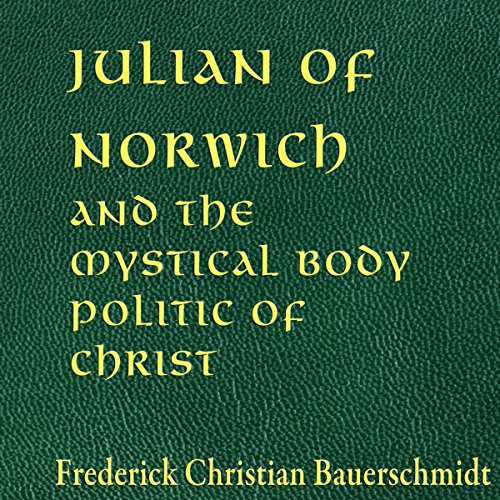 Julian of Norwich and the Mystical Body Politic of Christ

In May 1373, the English mystic Julian of Norwich was healed of a serious illness after experiencing a series of visions of the Blessed Virgin and of Christ's suffering. Her account, A Revelation of Love, is considered one of the most remarkable documents of medieval religious experience. In Julian of Norwich and the Mystical Body Politic of Christ, Frederick Bauerschmidt provides a close and historically sensitive study of Julian's Revelation of Love that addresses the relationship between our understanding of God and our vision of human community. By locating Julian's images of Christ's body within the context of late medieval debates over the nature and extent of divine power, Bauerschmidt argues that Julian presents an alternative account of divine power in which the crucified body of Christ becomes the locus and shape of divine omnipotence.

For Julian, divine power serves as the norm of all human exercise of power, rendering the possibility of the "mystical body politic of Christ" as the exemplary form of human community. Julian of Norwich and the Mystical Body Politic of Christ is a remarkable achievement of synthesis between a theological-political analysis of distinct contemporary relevance and historical faithfulness to Julian's own 14th century world.

"A stunning tour de force of imaginative scholarship. I have nothing but praise for this uniformly excellent book." ( Theological Studies)
"Extraordinary...I highly recommend this original, insightful, and provocative study." ( Spiritual Life)
"In this very important book, Frederick Bauerschmidt provides us with a more adequate account than any hitherto of Julian of Norwich specifically as a theologian, rather than as a mere spiritual writer or else as a feminist avant la lettre." ( Pro Ecclesia)