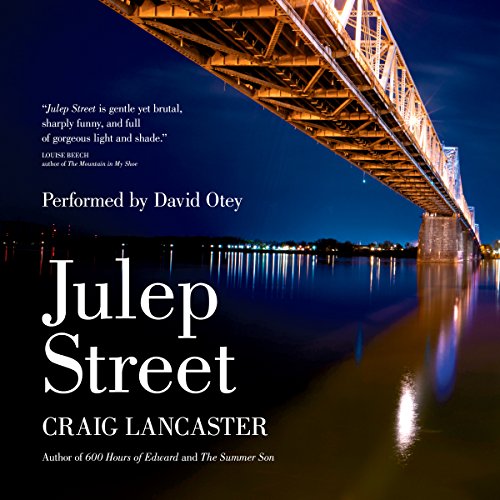 A middle-aged man, an ancient dog, and a new Mustang. A search for sustenance in a battered America.

Carson McCullough has given his career to a singular pursuit - putting out a small daily newspaper that keeps his employees engaged and his hometown informed. But as time and technology conspire against him, Carson's Argus-Dispatch is shuttered by a new owner with a different view of its future.

Stung by the abrupt end of his career and burdened by regret and grudges, Carson and his one true companion, a yellow Lab named Hector, set out on a road trip. As the miles pile up and Carson erratically drives into the residue of past decisions and the consequences of current actions, he confronts questions of love, faith, self-worth, and, perhaps most pressing, whether he can redefine himself after his identity is stripped away.

In his seventh novel, Craig Lancaster (600 Hours of Edward, The Fallow Season of Hugo Hunter) returns to the broad themes of his award-winning work and goes deeper yet, straight into the heart and mind of a good man who has lost his way and is struggling against himself to set things right.

A Compelling Trip Down Julep Street

Lancaster's best book yet! The protagonist, Carson, is a complex, very sympathetic character, and Hector is the best dog to inhabit a book in a long time. The tensions in the plot are current and very compelling, as is the struggle with religious faith. Narration is excellent! David Otey projects different voices for a variety of characters with slight variations in dialect and cadence . He avoids falsetto tones for the female characters and yet conveys their personalities. I am definitely recommending this Audible book to members of my book groups!

Lancaster does it again! Second only to the Edward series, this is his best novel so far. The book starts off unengaging and boring but it becomes pretty good around the twenty percent mark or so and gets downright fantastic at a specific turning point near the end.

Lancaster took a bit of a risk in this book by delving much deeper in to human and spiritual issues than he normally does. But it paid off. I found myself relating to major parts of Carson's (main character) experiences and to some of his thoughts. Lancaster also deviated from his usual patterns by setting this book in Kentucky instead of in Billings, Montana. That worked out just fine and I was excited that Murray State had a role in the plot since one of my best friends works there.

With the exception of "Edward Unspooled," Lancaster's books are most enjoyable as audiobooks. I was a bit hesitant to try "Julep Street" as an audiobook when I saw it was narrated by David Otey instead of Luke Daniels--my favorite narrator. But Otey slayed it! He was a good choice for this book.

Craig Lancaster is an underappreciated author with a bright future. I'm eager to continue reading his works.