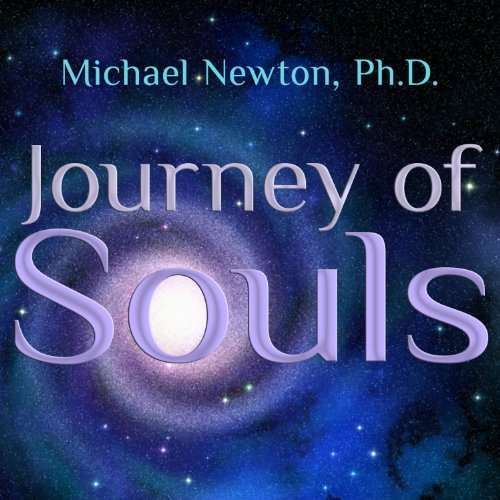 Now considered a classic in the field, this remarkable book was the first to fully explore the mystery of life between lives. Journey of Souls presents the first-hand accounts of 29 people placed in a "superconscious" state of awareness using Dr. Michael Newton's groundbreaking techniques. This unique approach allows Dr. Newton to reach his subjects' hidden memories of life in the spirit world after physical death. While in deep hypnosis, the subjects movingly describe what happened to them between lives. They reveal graphic details about what the spirit world is really like, where we go and what we do as souls, and why we come back in certain bodies. Through the extraordinary stories in this book, you will learn the specifics about:

This book has some really great content if you like books about reincarnation and life after death. But i would recommend reading it instead of listening to it. Why? Most of it's written in case study format, which i imagine looks like this (what i've written below is meant to be illustrative and not actual quotes):

Dr. N: "Tell me what you saw."
Patient X: "A bright white light and people."
Dr. N: "Did you recognize any of them?"
Patient X: "Yes. I saw my father and my uncle George."
And this goes on and on for each case study, of which there are well over 20.

While this format is fine for reading because your brain just sort of skims over the "Patient X" and "Dr N" parts, it is rather annoying to hear the narrator constantly say "Patient X: blah blah....Dr. N: blah blah....Patient X...blah blah" And so on.

The narrator does a fine job with what he's given, but it's just not good for an audible book.

Would you listen to Journey of Souls again? Why?

I've read it in paper form a few times. I have bought it in that form for friends on a half-dozen occasions. I wanted to review material since it had been about 10 years. I was hugely disappointed as I will describe...

The information/research was amazing.

Who would you have cast as narrator instead of Peter Berkrot?

Perhaps Simon Vance or any good voice actor. The book had one-on-one interviews with Dr. Newton and about 30 others. It would have been nice to have a different voice (whether real, by a separate person or with a simple change of tone.)

The entire book is non-stop groundbreaking information the entire world should be made aware of!

The original book analyzed one-on-one recorded sessions with Dr. Newton and about 30 hypnotized subjects. In the book these were transcribed as follows:

Which is just fine if you're reading. You SEE who is the next talking, but you DON'T repeat it to yourself, thousands of times, as it was narrated, complete with "pause" and "surprised" and other stage directions being spoken. Ridiculous!

A second voice should have been used (either by an additional narrator (or more) or by a voice actor changing their voice, alternating as necessary, and PAUSING or speaking quietly or excitedly as the notes suggested. But NOT speaking the words, "Long pause," "Timidly," etc...

I was anxious for this to be a good presentation. I would have probably gifted it to several people had it been. I would never consider doing so in this state. It is entirely distracting and at times, even hard to follow. I have even talked to a few friends about narrating the book as a project (done correctly!) just to be able to disseminate this important research in a manner that would be practical. If I ever actually do this, maybe I will contact Audible or Dr. Newton about purchasing the production.

Make no mistake. They really dropped the ball on this one. This is important information which is NOT made one IOTA easier to read/hear by this production and it could so easily have been. This book was not adapted for audio as many books are. It was simply narrated.

I will NOT recommend this to anyone, though I will still certainly recommend the book in written form. In fact, I just bought it in hard-copy for my girlfriend.

This book gave me glimpses into worlds I had never dreamed of. Some of it resonates with me, other parts seem too far out for me to believe, but I enjoy thinking about the possibilities anyway. The main part of the book that really resonates with me is that we are all parts of soul groups that gather between lives to help each other learn and grow. That point of view makes so many "coincidences" and circumstances of my life make more sense. It's helpful to me to hear more about this process from others. To me, because this information was gathered from many others using hypnosis, it represents a message from the collective unconscious.

When my friend recommended this book to me I was a little hesitant. I have believed in reincarnation for the last 20 years of my life, but have never thought much about past life regressions. This books goes beyond the past life syndrome and takes the reader to the life between lives. I didn't want it to end and I ended up getting his next book Destiny of Souls. You won't be disappointed. It is absolutely fascinating.

Great Answers to some questions of the afterlife.

I really enjoyed this audiobook. I think that people must have an open mind when deciding to go for this book. The book is based on 30 different accounts of hypnotic sessions, in which the subjects recount past lives and/or lives between lives. Overall, I enjoyed the information presented. The performance was okay, although the layout was a bit annoying! A second narrator should have been used to play the voice of the different subjects.

One of the best books I've listened to

This is a great book for expanding your knowledge on this subject. Highly recommend this!!!!

What made the experience of listening to Journey of Souls the most enjoyable?

The book is about afterlife but also guides us in daily material life on Earth. I have been reading lot about afterlife and there is lot of similarity in what clients of Micheal Newton are saying.

What does Peter Berkrot bring to the story that you wouldn’t experience if you just read the book?

Scienctific approach to the realiity of conciousness.

I really enjoyed the book finished it in two days. it opens your eyes to other possibilities

Where does Journey of Souls rank among all the audiobooks you’ve listened to so far?

I'd put it at 5th or 6th probably, very good book.

What other book might you compare Journey of Souls to and why?

The story of your life

What made the experience of listening to Journey of Souls the most enjoyable?

AMAZING, AND IT'S OPENED MY MIND! It's also filled in all the gaps w Christianity which I can now verify what the Dr. Claims in his book thru the scripture. Christians been way off long time cuz they don't read the bible right. Every verse instead of taking literal they wanna think it has some mystical meaning! No it dont! Read it & take it like says & it'll match this books claims as well! Promise! Great book! Jesus literally meant u had to reborn there was no figurative meaning he meant what he said, & proverbs 8:3 I believe or 3:8 says that I as here w you before the world began plus keep in mind energy cannot be created nor destroyed which our souls r made of. We were here since beginning of ETERNITY. God is the CREATOR CORRECT? Bible says we were made within his image? Well we were put here tocreate which well continue to help the creatorscreate once we die! Then rinse/repeatebpver & over.