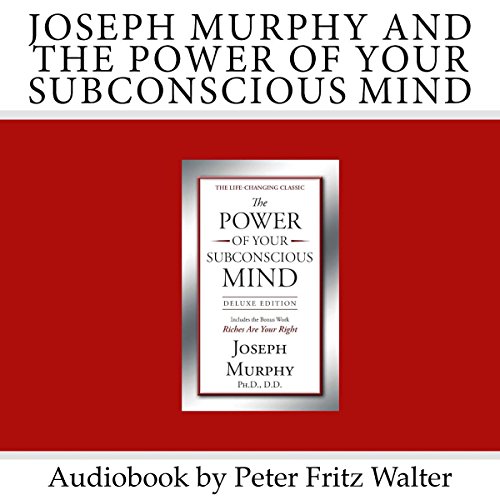 Joseph Murphy and the Power of Your Subconscious Mind: Short Biography, Book Reviews, Quotes, and Excerpts

Joseph Murphy and the Power of Your Subconscious Mind: Great Minds Series, Volume 6, 2017 Revised, Updated, and Reformatted Edition, is a study that features one of the greatest self-help authors of our time. Joseph Murphy (1898-1981), born in Ireland, was a naturalized American author and New Thought minister, ordained in divine science and religious science. He was born into a strictly Catholic schoolmaster family and was accepted as a Jesuit seminarian. However, by the time he reached his late teen years, he began to question the orthodoxy of the Jesuits and withdrew from the seminary, leaving his family for going to America, where he started a modest career as a pharmacist.

Parallel to his job, he began to study all of the world's religions, yet his concept of Christianity was nontraditional, and he founded his own church in Los Angeles, becoming a proponent of the New Thought movement, whose founder, Ernest Holmes, became his mentor. Gradually his classes, his sermons, and his radio programs became more and more widely known, and his fame spread with publishing his first best seller, The Power of Your Subconscious Mind, in 1963. Over the years he received several academic degrees as a scientist, a theologian, and a PhD as well. In his later years he also became a Fellow of the Andhra Research University of India.

After his first great publishing success, he wrote more than 30 other books that all become best sellers. He died in 1981, and his wife, Dr. Jean Murphy, continued his ministry. Dr. Murphy left a legacy that is highly important in our time of loss of soul in everyday life. His practical and yet deeply spiritual teaching and prayer technique, called scientific prayer, has left a markstone in our time for those who, without wanting to join a fixated credo, wish to live a spiritual life; do good to others; experience success, wealth, and recognition; and create inner peace.

What listeners say about Joseph Murphy and the Power of Your Subconscious Mind: Short Biography, Book Reviews, Quotes, and Excerpts

This great book to listen to and has great ideas. My only complaint is that some of the audio replayed after it was read. This was not a big issue but could have been by design.