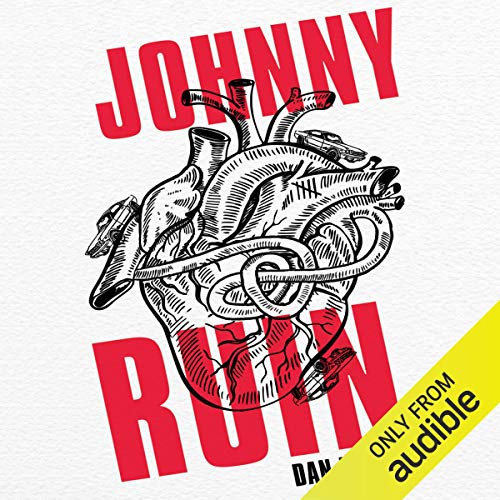 By: Dan Dalton
Narrated by: Ash Rizi
Free with a 30-day trial

'If a tree falls in a forest and Jon Bon Jovi is with you when it happens, is it still a figment of your imagination?'

Johnny Ruin is a literary novel that explores themes of heartbreak and mental health. The novel is set in the mind of the narrator, a surreal United States where each state is a new state of mind: lust, anger, jealousy.

Haunted by the idea that he is somehow broken, the narrator, a depressed 30-something writer, embarks on a trip through his own mind with his spirit guide, Jon Bon Jovi, for company. As they explore his memories, fantasies, and imagination, we learn he attempted suicide after a recent heartbreak.

From the redwoods of California to a crumbling New York City, the road trip travels the highways of the narrator's memory, an ever shifting landscape where fact and fiction rewrite each other. When his ex-girlfriend turns up demanding she be allowed to leave his mind, he has to decide whether to fix himself or engineer an escape for the one memory he's clinging to.

What listeners say about Johnny Ruin