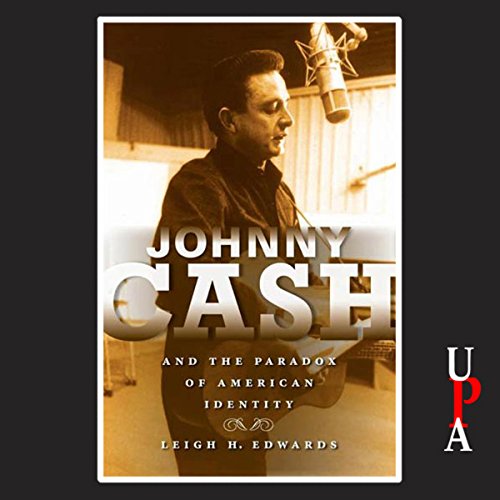 Johnny Cash and the Paradox of American Identity

By: Leigh H. Edwards
Narrated by: Beth Richmond
Try for $0.00

Throughout his career, Johnny Cash was depicted - and depicted himself - as a walking contradiction: social protestor and establishment patriot, drugged wildman and devout Christian crusader, rebel outlaw hillbilly thug and elder statesman.

Leigh H. Edwards explores the allure of this paradoxical image and its cultural significance. She argues that Cash embodied irresolvable contradictions of American identity that reflect foundational issues in the American experience, such as the tensions between freedom and patriotism, individual rights and nationalism, the sacred and the profane. She illustrates how this model of ambivalence is a vital paradigm for American popular music, and for American identity in general.

Making use of sources such as Cash's autobiographies, lyrics, music, liner notes, and interviews, Edwards pays equal attention to depictions of Cash by others, such as Vivian Cash's publication of his letters to her, documentaries and music journalism about him, Walk the Line, and fan club materials found in the archives at the Country Music Foundation in Nashville, to create a full portrait of Cash and his significance as a cultural icon. The book is published by Indiana University Press.

"Edwards' exploration... is nothing short of fascinating. The book provides in-depth analyses and challenges readers to think critically about 'Johnny Cash' (as well as Johnny Cash), a symbol that has been extremely important and influential in pop culture, but one that has not been widely written about as such." (Jason Buel, PopMatters)