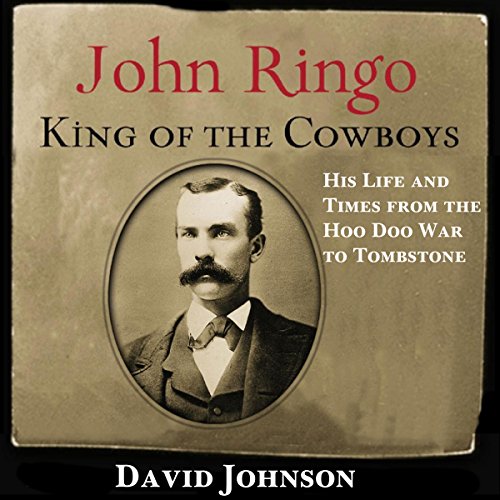 John Ringo, King of the Cowboys (Second Edition): His Life and Times from the Hoo Doo War to Tombstone

By: David Johnson
Narrated by: Barry Eads
Try for $0.00

Few names in the lore of Western gunmen are as recognizable. As a young man, Ringo became embroiled in the blood feud turbulence of post-Reconstruction Texas. The Mason County "Hoo Doo" War in Texas began as a war over range rights, but it swiftly deteriorated into blood vengeance and spiraled out of control as the body count rose. In this charnel house, Ringo gained a reputation as a dangerous gunfighter and man killer. The reputation he earned in Texas, further inflated by his willingness to shoot it out with Victorio's raiders during a deadly confrontation in New Mexico, preceded him to Tombstone in territorial Arizona.

Ringo became immersed in the area's partisan politics and factionalized violence. A champion of the largely Democratic ranchers, Ringo would become known as a leader of one of these elements, the Cowboys. He ran at bloody, tragic odds with the Earp brothers and Doc Holliday, finally being part of the posse that hounded these fugitives from Arizona. In the end, Ringo died mysteriously in the Arizona desert - his death welcomed by some, mourned by others, and wrongly claimed by a few.

"Historian Dave Johnson sets aside the legends and myths to present here the most complete biography of Ringo to date.'" (Chuck Parsons, author of John B. Armstrong, Texas Ranger and Pioneer Rancher)
"A dogged researcher and rigorous historian, David Johnson sure-handedly brings to light new truths and lays to rest old falsehoods about this misunderstood gunman's life and death."(Scott Zesch, author of The Captured, winner of the TCU Texas Book Award)

What listeners say about John Ringo, King of the Cowboys (Second Edition): His Life and Times from the Hoo Doo War to Tombstone

Yes, if they were interested in the history of the West

It is a little date heavy. Very factual, of course it is a non-fiction, but so many dates seemed to detract from the book for others traveling with me and listening to it in the car.

Very robotic sounding. Until I looked at the website I was thinking it might have actually been a machine reading it. I turned it off after a little while because it was boring.

Was John Ringo, King of the Cowboys (Second Edition): His Life and Times from the Hoo Doo War to Tombstone worth the listening time?

No, it was boring.

I wish I would have purchased the book rather than the audiobook. The narrator was extremely robotic and made a point of "over pronouncing" the words.

The information in the book is interesting but the narrator made it so boring the other passengers in the car asked me to turn it off.

While I would recommend the book itself, I would definitely not recommend it as an audiobook due to the narrator. I've listened to a number of non-fiction audiobooks and this is the only one that I felt was not worth the money. If it was free I still wouldn't listen to it and I definitely wish I hadn't purchased it.

very anti everyone except Ringo.

the book focuses on making bad guys good and good guys had. the author jumps to conclusions without any evidence to support the claims. I have read and listened to a lot of books on the subject of the old west. and this one is probably the worst as far as trying to be even in his assumptions.