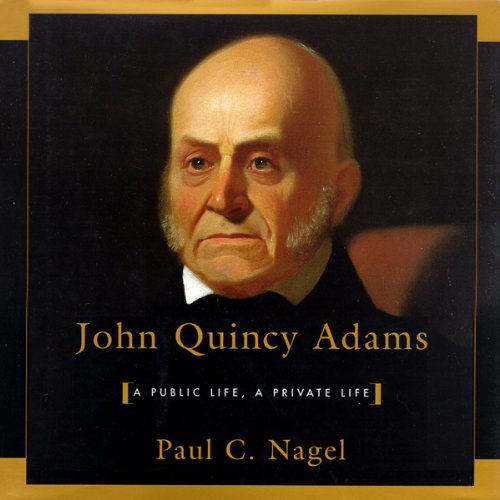 By: Paul C. Nagel
Narrated by: Jeff Riggenbach
Try for $0.00

A United States minister, senator, president, and congressman in turn, John Quincy Adams was one of the most prevalent and dedicated Americans in history. Drawing from Adams' 70-year diary, author Paul Nagel probes deeply into the psyche of this cantankerous, misanthropic, erudite, hardworking son of a former president whose remarkable career spanned so many offices. We learn about his passionate marriage to Louisa Johnson, his personal tragedies, including two sons lost to alcoholism, his recurring depression, exasperating behavior, and brilliant diplomacy. We see his frustration with the political life and the pleasure he drew from being a poet, critic, translator, essayist, botanist, and professor of oratory at Harvard. Nagel's great achievement, in this first biography of America's sixth president in a quarter century, is to finally portray Adams in all his talent and complexity.
©1997 Paul C. Nagel (P)1999 Blackstone Audio, Inc.
Historical Politicians Presidents & Heads of State United States
Show more Show less

"An excellent book...Jeff Riggenbach beautifully narrates the story as interesting, vital historical biography....His inflections and vocal shadings urge you to listen further and to really appreciate this most accomplished public servant." ( AudioFile)
"With this excellent biography...Nagel focuses more on the private Adams, utilizing diary entries to provide keen insight into this extraordinary man....The result is a fascinating psychobiography. Highly recommended for all libraries." ( Library Journal)

This biography by Nagel provides the reader with more of a character study of Adams than an historical biography. This is not a problem as long as you are expecting a biography focused more upon Adams' lengthy diary entries as opposed to a more objective analysis of Adams.

While this book had decent narration and production values, it is unlikely to enchant readers who do not already have an interest in John Quincey Adams.

This is a truly dull book. The author appears to be so excited to be using John Q. Adams’ manuscript diary that he has written more of a biography of the diary than of the man. The book sinks under the weight of trivia, as the author makes no effort to establish the significance of Adams’ daily activities and thoughts. Rather than analysis of the writings and actions of Adams, we get endless detail on what Adams ate, how much he paid for furniture, his opinion on flannel underwear, his hemorrhoids [seriously]. The author admits that Adams’ repetitious self-doubt can get tedious, and then goes ahead and quotes these passages over and over. The villain of this book is Abigail Adams, portrayed here as an early American “Mommie Dearest.” Nagel mentions books and essays by Adams, but does not quote from them, let alone unpack their significance. He states that Adams was a superb translator, but does not bother to give a single example of this skill. Here is a book on one of the finest intellects in early 19th-century America, and the reader will come away with the impression that Adams was shallow, self-involved, selfish, and rather annoying. It is little wonder that the narrator of this audio book often sounds bored.

You are taken through the full life of John Quincy Adams. The strength and weakness is that if feels like it is strictly from his point of view. The author often states that information is drawn from Mr. Adams private journal. As such, there is no great perspective on the former President's actions and achievements. That being said, it is well written and tells a great story. It is a great way to learn about a distinguished gentleman that lived an amazing life, but does not suffice as the definitive summary.

Nagel's account of JQA is decent and will probably be sufficient for most readers/listeners eager to get a good summary and account of his life and times. Serious scholars should probably look elsewhere. As a relatively short work, Nagel has to make some arguably controversial prioritizations in his telling of JQAs life. For example, only one chapter is devoted to his presidency and the tone of the text is that it was such a dismal failure that one could be excused for ignoring it. (I don't necessarily agree with this.) On the other hand, Nagel does a good job of telling the tale of JQAs life in the House and how he shined in that setting even though it would be easy to miss this since some of his brilliance was in parlimentery tactics at key moments. The narrator is difficult to take at times. He sounds very robotic and occasionally pronounces words oddly or gives awkward phrasing to sentences.

What did you love best about John Quincy Adams?

What other book might you compare John Quincy Adams to and why?

If I had the time to devote entirely to listening to this book I would have enjoyed the experience.

I found JQA a man devoted to learning.

This is an extremely good book, about an extremely important person. Through this book, you don't just learn about Adams, but also about some of the most important events of the early 19th century, which he was often a part of. I have read a lot on this period, and yet some of the more important events, such as the Treaty of Ghent and the Monroe Doctrine, are elaborated on here in more detail than just about anywhere else.

This was a good book and I learned a lot, but sometimes it reads like a laundry list and it gets a bit tedious as does the subject. Still, it was definitely worth listening to. In fact I listened to it twice. The author is very hard on Abigail but I enjoyed the perspective.

Worthy of your time

I don't recall how I acquired this book, but am very glad that I did. Before this, I didn't know a thing about JQA. Based on his exceptionally detailed diary, it provides a captivating comprehensive look into how the world was right after our country was founded, and engendered great appreciation in me for a man who had both virtues and faults, and who I was entirely ignorant of. It is vocalized exceedingly well, and I appreciate having heard the story of one of our presidents of long ago.

The depth of the research. Too limited to the diaries, and unbalanced.

What could Paul C. Nagel have done to make this a more enjoyable book for you?

Which character – as performed by Jeff Riggenbach – was your favorite?

There was more than one character?

Could you see John Quincy Adams being made into a movie or a TV series? Who should the stars be?

I agree with other reviews that this book lacks scholarship. The author draws conclusions regarding Adams that appear to be difficult transitions. It seemed clear to me that JQA was ADHD. I would have enjoyed more color to the narrative, some context. The limited exposure to the Adams presidency in the book was because Adams chose not to write much about it, not because there is a lack of record.

Great Biography of an Underrated American

What did you love best about John Quincy Adams?

I learned a great deal from this well researched book.

I enjoyed learning about Adams' devotion to his family.

Have you listened to any of Jeff Riggenbach’s other performances before? How does this one compare?