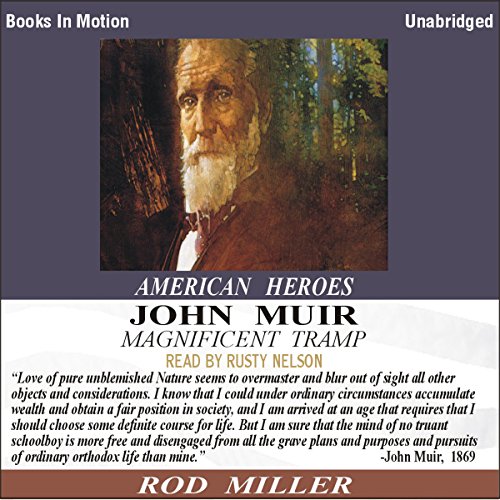 In 1849, 11-year-old John Muir emigrated from Scotland to America. Here, he rose from farmer and sawmill worker to become a noted authority on the botany, glaciers, and forestry of the nation's wilderness. Best known for his long association with the Yosemite Valley and Sierra Nevada Mountains of California, Muir also explored the southern states, Alaska, the Great Basin, and the Mojave Desert. His studies took him around the world and generated volumes of poetic, evocative writings.

As America expanded relentlessly westward, Muir witnessed the plunder and exploitation of the land and became a driving force in efforts to protect the natural world. A modest and private man, married and father of two daughters, his conservationist views forced himinto battle with powerful political and industrial interests. He influenced four U.S. presidents to sponsor legislation that protected forests and established or expanded America's national parks.

The story is very repetitive. Good if you're taking a test on John Muir bad if you're looking for an entertaining story. I found myself checking to make sure that I had not skipped back several chapters as information was repeated ad nauseum nearly word for word.

Poor narration and a confusing approach

John Muir's story is a fascinating and compelling one. However, the authors attempt at a thematic approach fell short of the mark, resulting in significant repetition and confusing jumping around timelines. The narrator would have been fine had he not attempted a Scottish accent at times, which was truly woeful and I doubt he has ever listened to a Scottish accent in his life.