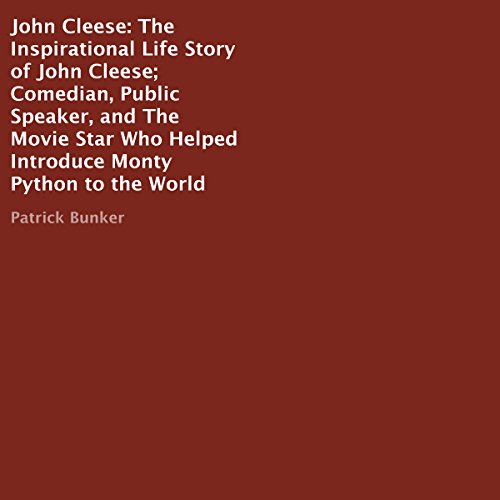 John Cleese: The Inspirational Life Story of the Comedian, Public Speaker, and the Movie Star Who Helped Introduce Monty Python to the World

By: Patrick Bunker
Narrated by: Rebecca Seip
Try for $0.00

John Cleese was born on October 27th, 1939 in Weston-super-Mare, Somerset, England. He was the only child of Muriel and Reginald Francis Cleese. His parents earned a modest living. His father worked as an insurance salesman while Muriel was a stay-at-home mother, but they still sent their young son to private schools, intending to give him the best education and opportunities imaginable. John began his schooling at St. Peter's, a preparatory school when he was eight years old. Early on, Mr. Cleese showed promise, receiving a prize for English. Additionally, John was an athlete, excelling in cricket and soccer for much of his young life.

Unfortunately even during his early life, John had a complicated upbringing. His relationship with his mother was strained. Cleese is quoted as saying, "When I was a child and I was upset about something, my mother was not capable of containing that emotion, of letting me be upset but reassuring me, of just being with me in a calming way. She always got in a flap, so I not only had my own baby panics, fears, and terrors to deal with, but I had to cope with hers, too. Eventually I taught myself to remain calm when I was panicked, in order not to upset her. In a way, she had managed to put me in charge of her. At 18 months old, I was doing the parenting." Cleese would later go on to say that his mother was "supremely self-centered" and that she "did not take interest in anything that did not immediately involve her." Those issues would persist throughout much of Cleese's life.

What listeners say about John Cleese: The Inspirational Life Story of the Comedian, Public Speaker, and the Movie Star Who Helped Introduce Monty Python to the World

Reader made this selection unbearable

I would like to have been able to rate this highly as the topic is one of my favorites. However, due to the reader’s cadence and inability to make the topic accessible, I simply could not complete the listening.