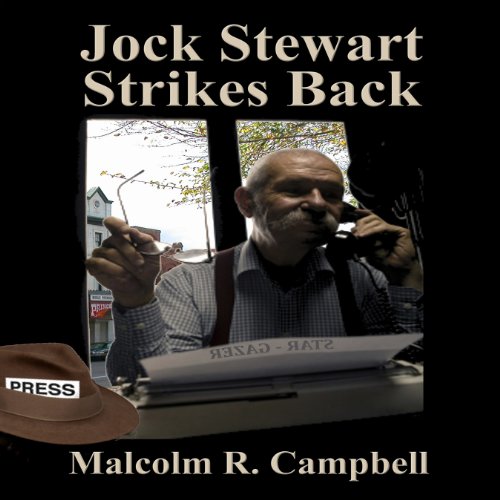 By: Malcolm R. Campbell
Narrated by: Barry Newman
Try for $0.00

The fictional news stories and "night beat" editorial columns in this collection began as posts on the Morning Satirical News blog and subsequently appeared in the Worst of Jock Stewart collection and/or the Jock Talks series of e-books. Jock Talks…Politics was a 2013 Pushcart Prize nominee.

Stewart, who served diligently as the protagonist in Jock Stewart and the Missing Sea of Fire, refutes charges that he was raised by alligators or hyenas. When he was a young boy, his dear old daddy said, "Jock, everyone but you and me is scum and I'm not sure about you."

That proverb opened Jock's eyes to the realities of the world, primarily that everything is worse than it seems: the small-town newspaper The Star-Gazer is allegedly run by fools and buffoons; the Junction City, Texas, government is allegedly corrupt and inept.

Since modern-day journalism is going to hell in a handbasket and/or nowhere fast, Jock Stewart strikes back by categorizing news events as satirical, outlandish, strange, or political. Nonetheless, according to informed sources, the use of this volume as a journalism textbook has not been authorized anywhere the world is right as rain.

What listeners say about Jock Stewart Strikes Back

Where does Jock Stewart Strikes Back rank among all the audiobooks you’ve listened to so far?

This book is very unique. I found it very entertaining so I'd have to rank it right up there with the best of all audio books I have listened to.

What other book might you compare Jock Stewart Strikes Back to and why?

I don't know of any book I can compare it to.

I think Mr. Newman did an excellent job. He walked you through the story with great execution. His diction was amazing and his dialects were spot on. I give him a standing ovation.

I hope there will be another Jock Stewart book coming out with Mr. Newman narrating. I will be quick to purchase it.