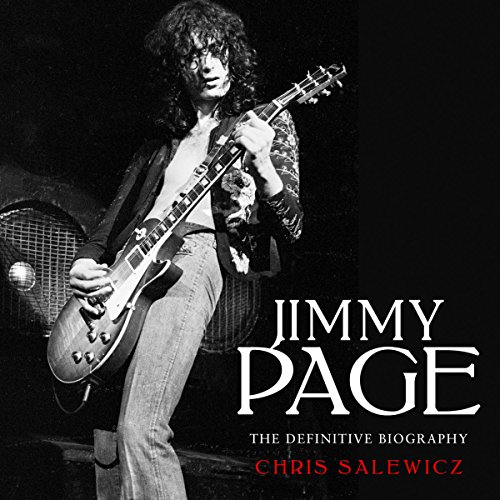 Founder of one of the most influential and successful rock bands of all time, legendary Led Zeppelin guitarist Jimmy Page has nevertheless remained an enigma. In this definitive and comprehensive biography of his life so far, Chris Salewicz draws on his own interviews with Page and those closest around him to unravel the man behind the mystery.

Having sold over 300 million copies worldwide, Led Zeppelin was the biggest band of the '70s and has been loved by the legions ever since. From his own conversations with Jimmy, the rest of Led Zeppelin, old girlfriends, tour managers and session musicians to name but a few, Salewicz reveals the many trials and tribulations which transformed the middle class boy from the Surrey suburbs into one of rock’s most enigmatic front men.

Detailed, thrilling and expertly researched, Salewicz discovers a man who was prepared to die for his art; who justified heroin use so he could harness its narcotic focus whilst making albums; and who overcame numerous death threats during this time. A warrior magician, Salewicz delves into the many skeletons and eccentricities in Page’s closet, contextualising him against a background of London gangsters, deaths and power struggles which Page has continued to rail against to this day, even within his own band.

As entertaining as it is insightful, and from a writer who experienced firsthand the Led Zeppelin furore, this promises to be as close to a Jimmy Page autobiography as fans can get.

"[An] ever-readable tome...Anyone intrigued by how a soft-spoken boy from the west London suburbs became one of the world’s most famous musicians won’t be disappointed." (The Times)

"[Salewicz] lovingly records all the highs and bathetic lows of the rock-star afterlife." (The Sunday Times)

What listeners say about Jimmy Page: The Definitive Biography

Well , considering the dearth of decent literature about the man , it wasn't a bad effort .

It reeks a little of geeky fan - boy 'greatest in the world' syndrome that Britain is notorious for , and you can't help but be left with the impression that the commercial success of these guys inevitablty turned them into a bunch of jumped up little shits ( perhaps with the notable exception of JPJ ) .

But nonetheless , a fair listen .

The Definitive Biography Of Jimmy Page is recommended to any Zep fans be they hard core or casual but beware the narrator, his erroneous pronunciation of many many words finally gets on your nerves and he clearly has little or no knowledge of his subject matter, I mean to boldly claim that Alison Krauss as an example of a Blues Grass musician!!!wtf???

A great biography let down by poor natration. Quite off putting at times. A real shame.

A so - so biography that offers a slightly disproportionate emphasis on his admittedly extensive pre-zep career. Very little insight into the recording and live career of zeppelin. However, by far the most intrusive aspect is the blundering performance of the narrator. He gamely mispronounces a hefty proportion of the names in the book and the random emphases and lack of pauses or changes of tone for new paragraphs suggest he doesn't have a clue what he is reading.

the reader is terrible

the book is GREAT but the person reading is awful. No flow at all. hard to listen to. the guy seems to miss the punctuation.

OK but is it opinionated?

OK but is it opinionated. Can some of the more outrageous "facts" be verified. Sometimes disjointed.

King of the Riffs

A fine biography of the king of the riffs - Jimmy Page. Entertaining all the way through. Jimmy Page has lived the archetypal rock star life - music, women, drugs, alcohol and scandal. Full coverage is given to his guitar playing starting as a young teenager playing skiffle; becoming the best session guitarist in the business and then onto the Yardbirds and of course, one, if not the greatest rock and Heavy Metal band - Led Zeppelin. Page was famous for combining the blues with innovative riffs (especially on Physical Graffiti) and also playing folk songs on the acoustic guitar, notably on Led Zeppelin 3 and No Quarter. Without doubt, the legendary guitarist is a strong contender for the No 1 spot - only Jimi Hendrix and Eric Clapton can make a similar claim. It is clear that Jimmy Page is proud of his Led Zeppelin legacy and so he should be but perhaps he has spent too much time on that golden period, sacrificing time that could have been used coming up with something fresh that could have competed with the standards he set with Led Zeppelin. It is clear how important Robert Plant has been to him and not being able to find a suitable replacement has been the biggest problem he has faced post-Led Zeppelin days. Out of respect for the great man, I will skate over the scandalous and dark side of his character, which is explored in the book. Whatever his demons, it appears that Jimmy Page has come out through the other end and is one of rock’s great survivors - which is great for his fans. I had the pleasure of seeing Page & Plant at Glastonbury in 1995 - a brilliant performance. I still believe he has more to give and a solo tour would be welcome. I for one will be there subject to ticket availability. This biography is recommended. Nevertheless, an autobiography from Jimmy Page himself would also be appreciated.

Lacks inside access, otherwise great insights. Also lacked something about the movie Page did with the Edge and Jack White.

Do I know anything about Jimmy Page I didn’t know before?

One thing.
He knew Dave Berry from Sheffield and so do I.
Quite the most disappointing biography I’ve heard or read.

Narrative is deep and research heavy.

Extensively researched, digs very deep, digressing and weaving through the 1950s, 60s, 70s, 80s, etc industry of music always back to JP. I enjoyed the detail and sometimes six degrees of separation. However, the narration is just about bearable. It sounds like the “narrator’s” voice has been appropriated by a computer for continuance and completion. Many - and I mean dozens- of the words naming places, people, titles and situations are appallingly mispronounced. It is but a benefit to my ears that I know much of the history, story, people and academia enshrined within the narrative, because if you don’t, you will be confused and in extreme cases, misinformed, This audiobook is for fans only, and then only if you can stand the total lack of connection and empathy from the so called narrator. My recommendation is to buy the hardcopy and read it (as I will).

Had great expectations of this, but it's written in a fanzine style, people 'shag' and lead 'hedonistic lifestyles' the music is full of 'carnality' and 'sex', and so a bit superficial. It is also quite repetitive which gives the impression of careless cut-and-paste. The book is okay as an audio timeline of Page's career, but best listened to while doing something else.