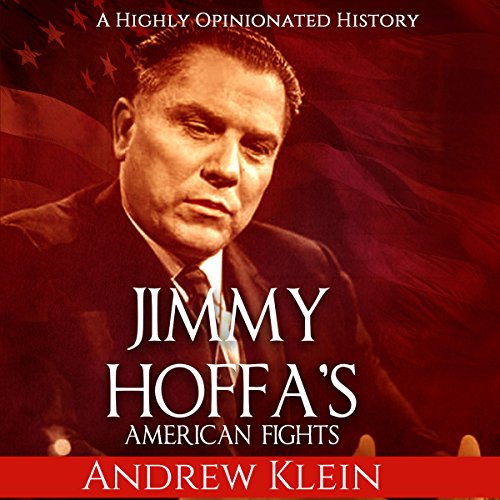 Jimmy Hoffa's American Fights: A Highly Opinionated History is both an accessible introduction to the life, times, trials, and disappearance of one of the most famous Americans of the 20th century.

Starting when Hoffa was a young man in the about-to-be boomtown of Detroit, the book follows him through his first job as a stock boy at Kroger's Grocery store through his early union agitation against a bad boss named the Little Bastard; through Hoffa's days as a brawler on Teamsters picket lines, and his rise through that union.

Andrew Klein's book pulls no punches, defends Hoffa, and destroys the perverse and pervasive influence of the Kennedy clan. This book presents a flawed and tragic charismatic hero in Hoffa, a powerful and bullying classic villain in Robert Kennedy, and a lush backdrop of union fights, personal betrayal, and presidential assassinations.

Full of some of the most interesting, eccentric, and evil characters in American history, if you have a typical American's fascination with mob figures and gangsters, you need to listen to this book.

Intense, well-researched, and full of fire and passion, Jimmy Hoffa's American Fights is a history unlike any other.