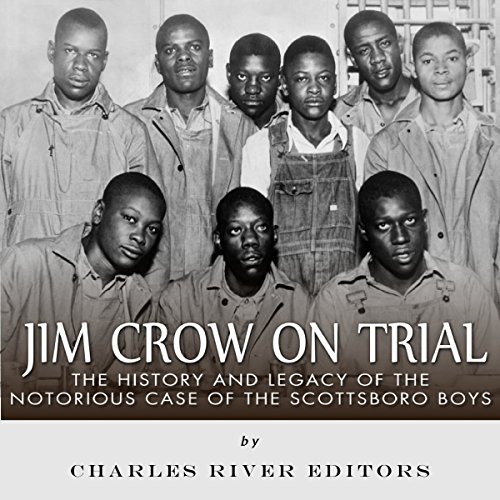 By: Charles River Editors
Narrated by: Doron Alon
Try for $0.00

"I'm interested solely in seeing that that poor...colored boy over there and his co-defendants in the other cases get a square shake of the dice, because I believe, before God, they are the victims of a dastardly frame up." (Samuel Leibowitz, defense attorney)

It goes without saying that Jim Crow was pervasive in the wake of the Civil War, but few events in history put the effects of institutionalized segregation and racism on display like the case of the Scottsboro Boys, a group of black teenagers accused of raping two young white girls on a train. When the girls made the accusation, the teens were nearly lynched by an angry mob, only to be dragged almost immediately into court and given a sham trial that inevitably ended in a conviction by an all-white jury and death sentences for eight of the nine boys.

In the wake of the quick trial, the case was appealed by outsiders on behalf of the boys, and though Alabama's Supreme Court affirmed almost all the convictions, the attention raised nearly every potential issue implicating criminal procedure among the states. While the Bill of Rights had ensured a number of rights for criminal defendants, the states had previously been allowed to interpret those rights, leading to instances where defendants weren't provided adequate legal representation. The case of the Scottsboro Boys compelled the US Supreme Court to order new trials in Powell v. Arizona (1932), which went a long way to determining and codifying some of the rights of criminal defendants in state courts.

However, even after one of the girls recanted her testimony during retrials, the Scottsboro Boys were still found guilty, leading to more appeals and yet another Supreme Court ruling ordering retrials. Eventually, some of the boys were cleared of charges, but several still ended up serving time in prison, and it would not be until 80 years after the controversial case that Alabama posthumously pardoned the defendants who hadn't been cleared of all charges. To this day, the case remains synonymous with the injustice of Jim Crow and the manner in which African Americans were deprived of basic civil rights, and historian Wayne Flynt may have put it best when he summed up the case and its aftermath: "I think that's perhaps an ultimate tragedy. People pulled into history who never wanted to be pulled into history suddenly put on a national platform, and tragically paraded out for everybody's benefit but their own. And the question of who really cared about them, who really defended them? Almost everyone had an agenda that involved the Scottsboro Boys. And I think the courage of the Scottsboro Boys is just surviving, just enduring."

Jim Crow on Trial: The History and Legacy of the Notorious Case of the Scottsboro Boys chronicles the infamous crime and the notorious trial that followed. You will learn about one of the most controversial cases in American history like never before.

What listeners say about Jim Crow on Trial

This was a terrible miscarriage of justice, those of us not born in that time can't begin to understand the racial discrimination many african Americans faced. Though this book is not as detailed as some, it does show the pervasive attitude of the time.
It is read in the style of a newspaper article, with much detail missing.