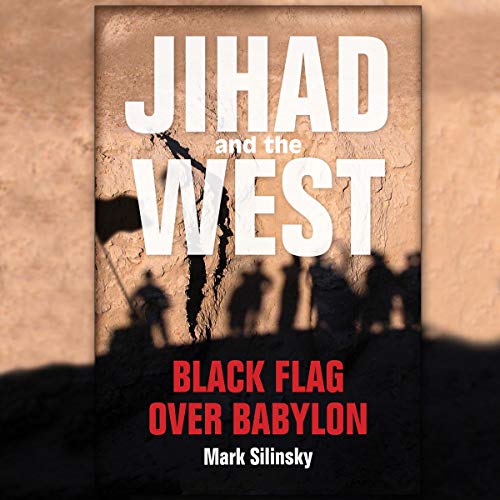 Jihad and the West: Black Flag over Babylon

Jihad and the West: Black Flag over Babylon

By: Mark Silinsky
Narrated by: Gregor Hinckley
Free with a 30-day trial

US Department of Defense analyst Mark Silinsky reveals the origins of the Islamic State's sinister obsession with the Western world. Once considered a minor irritant in the international system, the Caliphate is now a dynamic and significant actor on the world’s stage, boasting more than 30,000 foreign fighters from 86 countries.

Recruits consist not only of Middle Eastern-born citizens, but also a staggering number of "Blue-Eyed Jihadists", Westerners who leave their country to join the radical sect. Silinsky provides a detailed and chilling explanation of the appeal of the Islamic State and how those abroad become radicalized, while also analyzing the historical origins, inner workings, and horrific toll of the Caliphate.

By documenting the true stories of men, women, and children whose lives have been destroyed by the radical group, Jihad and the West presents the human face of the thousands who have been kidnapped, raped, tortured, and murdered by the Islamic State, including Kayla Mueller, who was kidnapped, given to the Caliphate’s leader as a sex slave, and ultimately killed.

What listeners say about Jihad and the West: Black Flag over Babylon

A lot I didn’t know

If you want to know more about Islam and Terrorism then this is the book for you.

Book can be improved needs to be recorded again.

This is a subject that most listeners are not well informed about.The information can be useful to the most casual observer but the Narrator could not deliver the best performance because the Audio quality was not of a high standard.

A new recording will deliver a better product.

This Book was given to me for free at my request and I provided this voluntary review.

This is the first book I’ve read/listened to by this author. it has a lot of varied information and is interesting. It is a book I think I need to listen to again to really take in all that is presented.

This is the first book I’ve listened to by this narrator ( Gregor Hinkley ) and I would listen to another. Given the content of this book I think he did ok reading it. His reading speed varied and he had obvious ends or pauses to certain words.
The audio quality varied and sounded muffled at times. The narrator marked areas he made a mistake and many were not edited out properly.

The first third of the recording was atrocious, due to mumbled and tripped over words, and a microphone with poor quality. It improved the last two thirds, but still not satisfactory.

The content is well organized and useful as an introduction to ISIS and the impact of the Caliphate on Europe and the Middle East. It pulls no punches, and covers the different perspectives toward what institutional and cultural forces gave rise to ISIS, without providing the author's analysis til the very end when, in the last half hour, the author summarizes the measures that he thinks will be necessary to contain and eventually defeat ISIS. Until then, the book is largely made up of dozens of profiles and articles curated from the mass media and social media forums, allowing the people who experience ISIS a louder voice in describing and defining it above the voices who justify, excuse and join the Caliphate.

It describes a horribly, ethically misshapen society developing within host-societies that are unable to identify and treat Islamic Militaristic-Fundamentalist threats for what they are. These are not "noble savages" trying to defend their lands, they are just savages, a signal of what we could become when we sacrifice our children to the rot of miscreant dystopian death cults and refuse to believe that the assault on Western Civilization is truly an assault on values that should be sustained.

This book describes the cities taken over by ISIS and their supporters as our "canary in the mine" - and it's worth reading this book, to be sure. Still, I wouldn't recommend the audio book version of it until it's been completely re-recorded and properly produced. If I didn't receive this book for no cost on condition of offering a review, I'm not sure that I'd have been able to get through it - and it'd be a pity, because it's got a lot we all need to hear.

Jihad and the West: Black Flag over Babylon. I had great expectations of this book, but ended up slightly disappointed.
Rather than a multi viewed look at Jihad and the West it was turned into a list of headlines with a little extra background information. Questions were asked but answers or suggestions were not included.
Production quality was poor in places but overall OK.
Narration was poor and the narrator always seemed to be speaking to fast.
I was given a free copy of this audiobook at my own request, and voluntarily leave this review.