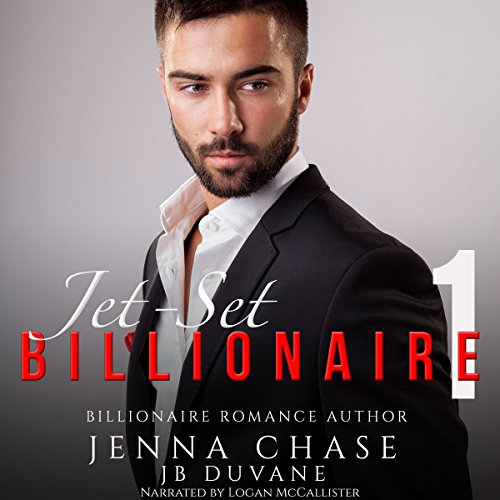 By: Jenna Chase,JB Duvane
Narrated by: Logan McAllister
Try for $0.00

Recently single flight attendant Erica Blake finds herself caught between her pilot ex-boyfriend, Brad, and billionaire Malcolm McDaniel on an intercontinental jaunt on his private jet.

The young playboy is en route to Tokyo with a bevy of beauties, and it's up to Erica to remain professional even when he decides that the most gorgeous woman on the plane is her!

Malcolm is used to getting his way and won't take no for an answer. He'll do whatever it takes to convince Erica that he's the man she needs to move on from her ex. But when ex-boyfriend Brad sees Erica after their time apart, he lets her know that he has no plans to let her go.

This is the first part of a steamy four-part romantic adventure series, each of which can be listened to on your lunch break.

I got this book via audiobook boom. This was less than an hour of book and ended so fast that I had to look at my headphones to determine if they needed charging. The story and narrator were good but not complete.

“I was voluntarily provided this free review copy audiobook by the author, narrator, or publisher.

Erica is a flight attendant on a billionaires flight to Hong Kong Her ex boyfriend is the pilot. It is the first part ending a startling cliffhanger. It moved quickly. I primarily rate it 3 because it is a cliffhanger.

The story itself is good and so is the narrator although i don't care much for his female voices. i am interested in finding out what happens.

Enjoyed the story but not...

I enjoyed meeting sexy Erica. I have to admit just listening to the audio I thought Erica was a man. There was nothing feminine about the voice. This threw me for a good part of Thai less than an hour narration. I did like the story. I have to say that I would like more just to see what happens next for Erica.

Overall, I enjoyed the book but it ended abruptly and was pretty short...

YES! It pissed me off. I couldn't believe how short it was. Forgive me for not being observant. UGH! The cliffhanger on this story had me actually yelling WTF!

I received this audiobook free for an honest review. The only complaint is that there are four books that are basically four chapters to one book. I don't understand why it is done that way, but assume there is a reason. The story was good, but if you are thinking it is a short story, you would be mistaken. The narrator did a good job. Just disappointed that after receiving Part 1 for free, the ending was a cliffhanger and I had to purchase the other three books to finish the story. Ugh!!!!!

This first installment of the serial is packed full of romance and suspense. We meet Erica, the flight attendant who is highly attracted to the owner of the plane, Malcolm. The heat on the plane between these two is intense. I have to give Jenna Chase and JB Duvane so much praise for being able to give us insight to these two characters in such a short amount of time. The character development is quick and thorough, the exchange between the two fun, frustating and hot.

The cliffhanger...where is book 2? I need to know what happens! Looking forward to it!

Logan McAllister has a rich voice, perfect for this romantic suspense.