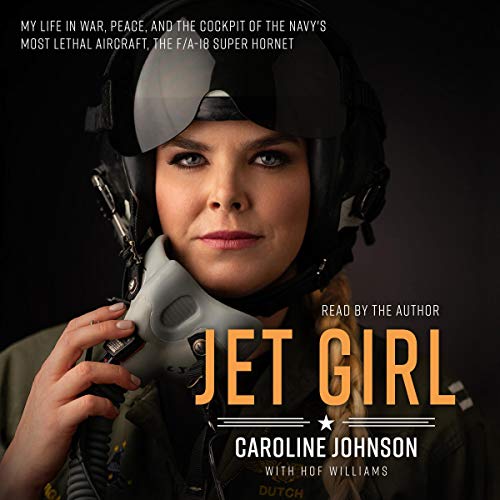 "Fans of military biographies and memoirs will enjoy this inside look at the experiences of a determined woman in the cockpit." (Booklist)

A fresh, unique insider’s view of what it’s like to be a woman aviator in today’s US Navy - from pedicures to parachutes.

Caroline Johnson was an unlikely aviator candidate. A tall blonde debutante from Colorado, she could have just as easily gone into fashion or filmmaking, and yet she went on to become an F/A-18 Super Hornet Weapons System Operator. She was one of the first women to fly a combat mission over Iraq since 2011, and she was the first woman to drop bombs on ISIS.

Jet Girl tells the remarkable story of the women fighting at the forefront in a military system that allows them to reach the highest peaks and yet is in many respects still a fraternity. Johnson offers an insider’s view on the fascinating, thrilling, dangerous, and, at times, glamorous world of being a naval aviator.

This is a coming-of age story about a young college-aged girl who draws strength from a tight-knit group of friends, called the Jet Girls, and struggles with all the ordinary problems of life: love, work, catty housewives, father figures, make-up, wardrobe, not to mention being put into harm’s way daily with terrorist groups such as ISIS and world powers such as Russia and Iran.

Some of the most memorable parts of the audiobook are about real life in training, in the air and in combat - how do you deal with having to pee in a cockpit the size of a bumper car going 900 miles an hour?

Not just a memoir, this audiobook also aims to change the conversation and to inspire and attract the next generation of men and women who are tempted to explore a life of adventure and service.

What listeners say about Jet Girl

Why was this book not called # me too navy flyer

The book was just o.k. Until she put many of the squadron members under the bus with admitting that she had an affair with a married member of the Navy. How many guys are getting the stink eye by admitting “her” mistake . Every married man in her squadron has been ask many times “ was that you?!”


If the Navy had found out about that relationships before she left they would have tossed her out with no benefits. Behavior unbecoming of a Naval Officer

She wanted to be one of the first women to fly in a jet as a wso knowing full well that it is hard road she went down, but even the men have high standards they had to meet but you don’t here them crying about being picked on.

I think she set the Navy back 50 years with women on boats, she will be held up as the main reason and the sexual tension. And assaults that take place on those ships.

Looked forward to reading this as a female aviator myself. Found her story to be helpful and insightful in some aspects. However, saw many avenues when she could have taken the high road or gone a little deeper. Left unchecked, consequences inevitability would occur, or things blow up in her face. Just a whiplash of a book to read, honestly. Would have liked to see a self-development story, but it sounds like she was on survival-mode for most of her career. Saw patterns of self-destruction and how that got worse in later military life. That was hard to read. Sorry if you read this, Caroline. Not meant to offend, but just was dragged down for most of this book and really didn’t feel like I walked away better because of it. Hopefully you got something out of writing it, though.

While parts of the story were devastating and infuriating it was an amazing story and very interesting insight into the military. Caroline holding herself to high standards and always pushing the envelop was incredibly inspiring and motivating to continue the fight for equality for women and minorities. Highly recommend, I can’t wait to share it with my nieces someday.

Wow, what a ride!

As a lover of the tv show JAG, I have always wanted to know more about the military experience of women and the life of fighter jet pilots and this book checked both boxes! I really cannot fathom all that Caroline Johnson has accomplished already in life but it makes me supremely proud to live in a country where all of that is possible. Thank you Caroline for your service and for sharing your story, the good and the bad, with the rest of us.

I think your age made you incredibly naive.

but I have tremendous respect for you sheer will and determination. i know your on the speaking circuit now. that i have a big problem with.

important and valuable recount of experiences, a benefit to all mature enough to listen.
I am deeply disappointed with those in our Navy who bullied, harassed, sexually harassed, ignored, and facilitated such immature, despicable behavior, wives included. go jetgirls.

My dream job for as long as I can remember was to be a WSO! Hearing Caroline’s story of dedication, strength, ups downs and all around really opened my eyes to a life path I so wanted to be on! Her description of the rigorous training, the sacrifices and the reality of being deployed at war time were very powerful! The book, to me, was open and honest and I could not stop listening!

Thank you for your service! Thank you for forging a path for Female Aviators and Thank You for not sugar coating the things no one talks about!

Loved this book. it is a must-read. the accomplishments and battles of today's navy avatars.

I thought this would-be motivational for my daughter, nope. Dads, teach your sons tobe respectful!

A different point of view

It felt a bit slow in the beginning but after a while I really enjoyed it. I've consumed quite a few books written by fixed wing and rotary wing pilots, seals, ranger, and other military personnel and this was a great addition to my collection. It was refreshing with a woman's point of view, even though some of the things she experienced, because she was a woman, infuriated me.

I'd definetly recommend it to anyone interested in the subject and experience of a female naval aviator.

This is a book that once you start listening to you will not be able to stop. Not only is it well written and well narrated by the author it tells a fascinating story of not only the sacrifices and training a member of the US military and a Navy pilot goes through but also the struggles a successful woman has to endure. Hard to believe sexism goes on in this environment and at this level even though she is proven to be better than her male counterparts. Frustrating and shameful. An Inspirational book, which in parts, I will share when appropriate with my two daughters as I believe Caroline is a fantastic role model.

Great for aviation and military fans.

Gives an insight into day to day naval aviation life. The reader feels like they are in the cockpit, and some of the poorer experiences may be too familiar for some. Thanks for sharing your story Caroline.