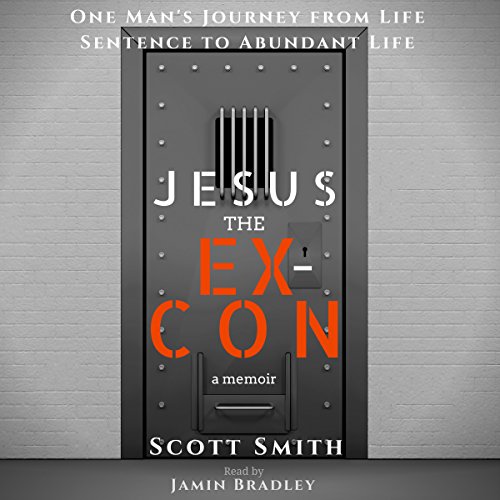 By: Scott Smith
Narrated by: Jamin Bradley
Try for $0.00

In August 1999, Scott Smith enrolled in Bible College with aspirations to become a minister for Jesus...Wait! That's not actually true. He only attended for the girls.

A few years later, after engaging in a string of criminal activities, Scott found himself in a much different institution after being sentenced to life in prison - and the only "girls" were the HIV-positive transvestites who did their best to hide their beards.

Within the first few days locked behind 60-foot high walls, Inmate #461419 quickly realized he wasn't prepared for the rampant gang violence, corrupt guards, and suicides. He was in a new type of hell on earth that his religious textbooks never mentioned.

In this captivating memoir, Scott takes listeners behind the walls of prison by sharing entries from his prohibited make-shift journal. He also reveals the intimate details that led to his life sentence - details that were once secret but now explain his astonishing story.

In Jesus the Ex-Con, you will laugh, cry, and even wince, but this story is not entirely dark and sinister. You will also encounter a miraculous plot twist when Scott shares how he met an unusual convict who taught him how to escape the hell he created for himself. Although his story is filled with drama and pain, it's also laced with hope and redemption - and it will touch every listener's life! Get ready for a true story you'll never forget!

What listeners say about Jesus the Ex-Con

I was hooked within the first few minutes. Not only is this a story burdened down with bad decisions and twists of our government system, but a life journey of God's grace, redemption, and freedom.
Within Scott's life story there are moments where each person reading/listening can relate to and recognize how God saved them, protected them, and showered grace upon them. This book is a modern day example of how God can take any person, at any stage in their life, and turn it into a life living in abundance.
Thanks for sharing, Scott!

If you're looking to listen to this audiobook, the narrator does a fantastic job and keeps you engaged!

Jesus is the best

This is what happens when you fully give your life to Jesus, thanks Scott for sharing your whole life

The power of the Gospel is an uncanny force in our lives that can take our lowest points and use them for positive change. This testimony of how Jesus renews the spirit of the author, reminded me of the power and grace that never fails to change the fabric of who we are once we accept His forgiveness. Very well written autobiography by Scott Smith, and very well narrated by Jamin Bradley! The voice inflection and animation changes to reflect each character are pivotal to the emotion and authenticity of Scott's testimony, and keeps you interested in hearing more.

I found this book to be an audio page turner! What a journey this man has been on, would recommend this book to anyone seeking deeper meaning and fulfillment in life. I appreciated the raw storyline and great narration as well.