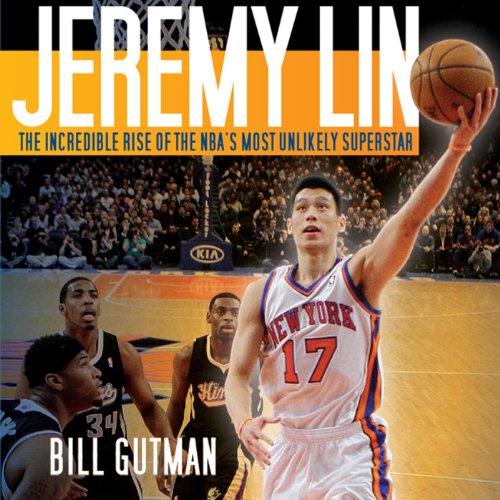 The Incredible Rise of the NBA's Most Unlikely Superstar
By: Bill Gutman
Narrated by: L. J. Ganser
Length: 2 hrs and 12 mins
Categories: Biographies & Memoirs
3.5 out of 5 stars 3.6 (5 ratings)

Who would have thought that an Asian-American, who stood just 5' 3" tall as a freshman in high school, and eventually went to Harvard to major in economics, would become the NBA's most talked about star in decades?

But that's exactly what happened to Jeremy Lin. Undrafted out of college and subsequently waived in short order by both the Golden State Warriors and Houston Rockets, Lin was signed by the underachieving New York Knicks. After a three-game stint in the D-League for players deemed not yet good enough, he was recalled when a roster spot opened up. In his first 23 games, however, he played for just 55 minutes and was again close to being cut.

Then, on February 4, he came off the bench against the New Jersey Nets and scored 25 points and led the Knicks to victory. He started the following game and took off, scoring 28 points and adding 8 assists. And just like that… Linsanity was born.

In his first five starts, the now 6' 3" Lin not only showed that he knew all the nuances of playing point guard, but also made the players around him better. With the Knicks two biggest stars - Carmelo Anthony and Amar'e Stoudemire - out of the lineup, the Knicks won seven straight, making Jeremy Lin the toast of New York and the biggest feel-good story in the NBA.

Madison Square Garden is again rocking every night as Jeremy Lin continues to lead his team toward an unexpected playoff berth.

Another inspiring story. Great job for Jeremy. Thanks Audible and author Bill Gutman for sharing this.