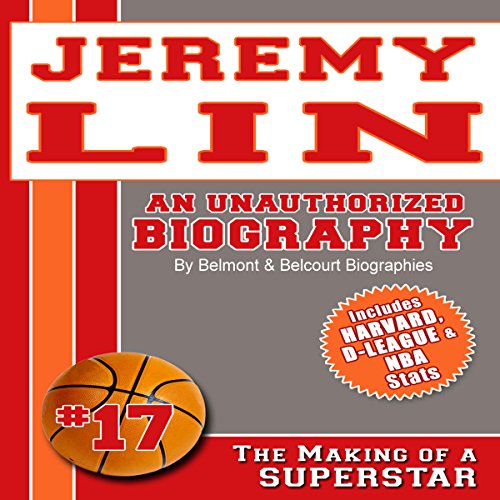 By: Belmont and Belcourt Biographies
Narrated by: Doug Lee
Try for $0.00

With the whole world watching his every move, Jeremy Lin has become an international phenomenon. Everyone is talking about him, breaking down his basketball skills and analyzing him in every way. But does anyone really understand where he came from and how he got here? With Jeremy Lin: An Unauthorized Biography, listeners will learn everything there is to know about Jeremy Lin and discover exactly how he went from obscurity to ''Linsanity'' - seemingly overnight.

After being passed over by top colleges, then spending a year warming benches and getting passed back and forth between NBA and D-League teams, Jeremy Lin has given the world of professional basketball unforgettable breakout performances, rocking Madison Square Garden and leaving everybody asking, ''Just where did this guy come from?''

The answer is simple. He's been hiding in plain sight. The 23-year-old Harvard graduate has been an outstanding ball-player from an early age. Jeremy Lin's story is both astounding and uplifting and something that shouldn't be missed. From Palo Alto to Harvard to the NBA, this is the story of Jeremy Lin.

The audiobook also includes all of Lin's collegiate, D-League, and NBA statistics.

What listeners say about Jeremy Lin: An Unauthorized Biography