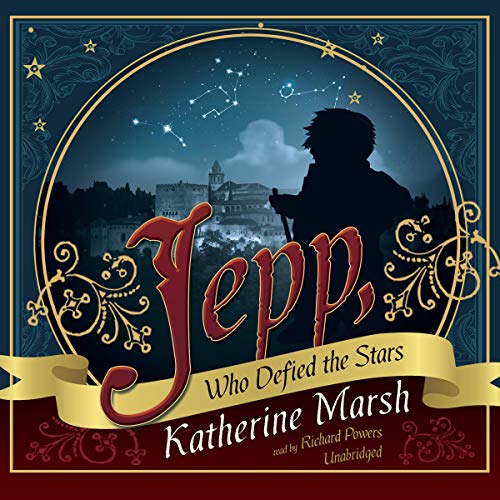 Jepp, Who Defied the Stars

By: Katherine Marsh
Narrated by: Richard Powers
Try for $0.00

Fate - is it written in the stars from the moment we are born, or is it a bendable thing that we can shape with our own hands? Jepp of Astraveld needs to know.

He left his countryside home on the empty promise of a stranger, only to become a captive in the strange, luxurious prison that is Coudenberg Palace, the royal court of the Spanish infanta. Nobody warned Jepp that, as a court dwarf, daily injustices would become his seemingly unshakeable fate. If the humiliations were his alone, perhaps he could endure them, but it breaks Jepp’s heart to see his friend Lia suffer.

After Jepp and Lia perform a daring escape from the palace, Jepp is imprisoned again, alone in a cage. Now, spirited across Europe by a kidnapper in a horse-drawn carriage, Jepp is unsure where his unfortunate stars may lead him.

Before Jepp can become the master of his own destiny, he will need to prove himself to a brilliant and eccentric new master - a man devoted to uncovering the secrets of the stars - earn the love of a girl brave and true, and unearth the long-buried secrets of his parentage. He will find that beneath the breathtaking cruelty of the world is something else: the persistence of human kindness.

Masterfully written, grippingly paced, and inspired by real historical characters, Jepp, Who Defied the Stars is an awe-inspiring story of triumph in the face of unimaginable odds.

Katherine Marsh was formerly the managing editor of the New Republic, senior editor at Washington City Paper, and contributing editor at Rolling Stone. Her books have been featured and praised in USA Today, New York Magazine, the New York Times, and Washingtonian. Her novel The Night Tourist won the Edgar Award for best juvenile mystery.

"Delightful characters, unique setting, and lovely prose. This is historical fiction at its best!" (Ruta Sepetys, New York Times best-selling author of Between Shades of Gray)

"This highly unusual story about a highly unusual hero will also feel like your story. Few of us are imprisoned dwarfs, but all of us want to guide our own lives." (Jonathan Safran Foer, New York Times best-selling author of Extremely Loud and Incredibly Close)

What listeners say about Jepp, Who Defied the Stars

I was captivated by Jepp’s journey and the details of 16th century Europe. This novel is as as satisfying for me as it would be for any 16-year-old—perhaps even more. The Audible narrator’s voice captures the magic of Marsh’s storytelling, and I fell in love with the characters whose surprising motivations were realistic and honest. Maybe I like most that Jepp’s story is a tale that promises no easy answers or successes in life, and shows that real love requires patience and trust and the courage to find your own path even as your hearts are traveling as one. Jepp feels like a classic already—and now one of my favorite stories.