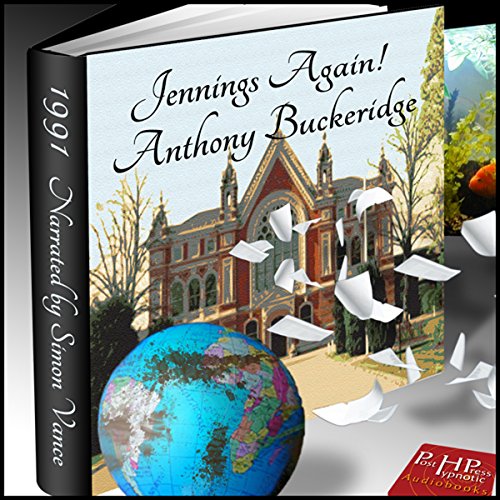 By: Anthony Buckeridge
Narrated by: Simon Vance
Try for $0.00

"Dear Miss Thorpe, We hope you are quite well. We are very sorry we did not do your leaflets very well owing to strong winds. Darbishire has some new laces so we will give you your elastic band back when we come but it has got stretched a bit owing to Darbishire’s shoe…’

Linbury goes green and Jennings and Darbishire want to do their bit for the environment. Given the simple task of distributing leaflets, what could go wrong? But when Darbishire’s shoelace refuses to stay tied, Jennings, using his usual initiative, removes the rubber band holding the leaflets together and performs an emergency shoelace repair. All seems fine, until a gust of wind hurls the leaflets over Marina Gardens. The residents are none too pleased, and it’s poor Mr Wilkins who’s going to get the blame… ‘addle-pated eyewash!’ Jennings Again! is one of a series of 25 books by Anthony Buckeridge. The Jennings stories originated in a series of radio plays for the BBC’s Children’s Hour, which proved so popular they spawned this delightful series of books. The tales make liberal use of Buckeridge's inventive schoolboy slang ("fossilised fish hooks!," "crystallised cheesecakes!," and others).

Published between 1950 and 1989, these books were favorites among a vast assortment of kids all over the world. Jennings Goes to School and Jennings Again! were adapted for radio by Anthony Buckeridge and read by Stephen Fry, and Mark Williams (Aurthor Weasley in the Harry Potter films), recorded an abridged version of Jennings Little Hut, all produced by the BBC. Loved by kids and adults alike, the Jennings books were translated into several languages and have sold over six million worldwide. Described as “Harry Potter without magic, but funnier,” and “P.G. Wodehouse for kids,” you’ll want to check out the other titles in this series available from Post Hypnotic Press.

What listeners say about Jennings Again!

A Slow Walk Down Memory Lane.

Image my delight when I came across the tales of Jennings and (my personal favourite character!) Derbyshire. As a child I devoured all of these classic children's books, waiting anxiously for the next one in the series to be released.
I was introduced to the books by a very friendly and extremely helpful Librarian. We had a competition in the local library (Redcar if it has any significance to this review!!!), a list of twenty five different titles had been compiled and the more you read, the better your chances were of winning some prize or other. I think the prize was for National Book Tokens.
The prize for me though turned out to be the introduction to a lifelong love of reading and to some of my favourite books of all time. I read each one on the list voraciously and after we had answered some questions about the title, you moved on to the next one on the page.
I was introduced to a certain young caveman called Stig of the dump (my favourite book of all time and one I still come back to today), The Wolves of Willoughby Chase, Paddington, The Secret Seven and Famous Five and a whole load of other classics, some of which turned out to be a couple of Jennings titles.
After reading the very first one in the series I was hooked. They made me laugh out loud, they took me to an era close enough to mine, but happily far enough away to still be romantic to my mind. I dreamt of life in a boarding school and having great chums around me but most importantly, they took me to a place where I was happiest, somewhere the family who were meant to love and protect me, couldn't get to me. No longer could their cruelty and violence touch the world where Jennings, Derbyshire and I went to when they weren't around.
So to find these beautiful books again has lifted my heart and given me wings to fly (it's okay, I don't touch Red Bull!), I am extremely grateful to Mr. Buckeridge for these precious gifts and I sincerely hope they give you some joy too. I shall, of course, have to get all the titles that are available now and wait with bated breath for those still to come. Five Stars all the way!
Happy Reading,
Andrew

I used to love these stories when I was the same age as Jennings and.still love them 40 years later. Just a shame there aren't many available.

Hilarious. A amazingly funny book that I would put up there with Jennings Diary in the contest for funniest audio book ever. Only one criticism, I would have loved it to be longer.

As a child at boarding school, the Jennings stories were read too us before lights out and now, over forty years later, Simon Vance has more than re-captured the spirit of those years, he's given the stories and the characters within them a whole new lease of life for me personally.