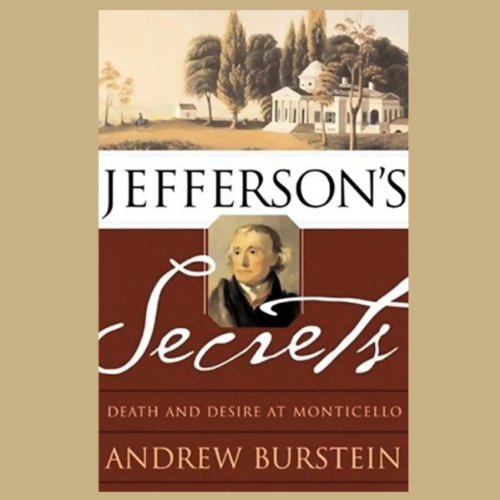 By: Andrew Burstein
Narrated by: Simon Vance
Try for $0.00

In this moving and intimate look at the final days of our most enigmatic president, Andrew Burstein sheds new light on what Thomas Jefferson actually thought about sexuality, race, gender, and politics.

Thomas Jefferson died on July 4, 1826, leaving behind a series of mysteries that captured the imaginations of historical investigators, an interest rekindled by the recent revelation that he fathered a child by Sally Hemmings (a woman he legally owned), yet there is still surprisingly little known about him as a man. In Jefferson's Secrets Andrew Burstein focuses on Jefferson's last days to create an emotionally powerful portrait of the uncensored private citizen who was also a giant of a man.

Drawing on sources previous biographers have glossed over or missed entirely, Burstein uncovers, first and foremost, how Jefferson confronted his own mortality; and in doing so, he reveals how he viewed his sexual choices.

Delving into Jefferson's soul, Burstein lays bare the president's thoughts about his own legacy, his predictions for American democracy, and his feelings regarding women and religion. The result is a moving and surprising work of history that sets a new standard, post-DNA, for the next generation's reassessment of the most evocative and provocative of this country's founders.

"While Jefferson remains an elusive target, one is left with this inspiring analysis of a life superbly lived." (Booklist)
"Splendid....This is a deeply moving portrait of the aged Jefferson's body, mind, and spirit that takes the measure, as Burstein says, of the full range of the founder's imagination." (Publishers Weekly)

What listeners say about Jefferson's Secrets

Should have been a short story.

The author took what might have made a good short story (maybe 2 hours maximum) and turns it into a monotonous, gruelling 14 hours of overkill, read by a poor reader that only makes it that much more torturous. Most of his concepts are repeated so often you think you have rewound the book in error. If you are interterested in Jefferson, find a better biography than this one.

This book is probably one of the most unorganized biographies I have read. It is not laid out in chronological order, but it bounces around in time. It is as though the author was too preoccupied with the possibility of scandel in Jefferson's personal life, and the book starts right there in Jefferson's latter days, moves around chronologically, and then returns to his latter days at the end of the book. I would have preferred that it began in Jefferson's early life and progressed through time and approached each element of his life as it came. The scandal is thrown at the reader right away, and the rest of Jefferson's life becomes an afterthought.

It’s great there’s research done on the past. Although the fictive or non-fictive matters always seem to collide. A cherished memory of the country - it’s a true and eloquent American pyramid built up and a marvelous wonder of the world. No one source nor all of them will ever discover nor practically imagine the person and the times. Indeed, History at its best is mere legend and lore. Everything other than that one can only imagine from what artifact remains in time.