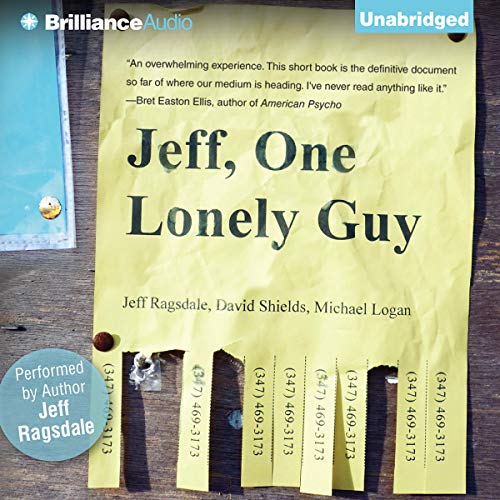 In October 2011, Jeff Ragsdale, a down-and-out actor and stand-up comedian, posted a flyer around Lower Manhattan asking people to call him if they wanted to talk. He thought he’d get a dozen calls; instead he got hundreds, and then thousands, once pictures of the flyer went viral on the net. The calls came from all over the country and from as far away as Spain, Saudi Arabia, Iraq, Taiwan, and Australia. Jeff spoke to as many people as he could, answering his phone all day long. Here are the conversations, texts, and voicemails of a particular moment in time - a hilarious, dark, intimate portrait of the way we live now.

“With Reality Hunger, David Shields offered us a manifest, yet unlike most manifestoes, Reality Hunger actually changed the world. Here, by teaming up with Ragsdale and Logan, Shields has now embodied his ethos - we have crossed over the threshold and are now strangely, terrifyingly, beautifully - in this transformed world.” (Nick Flynn, author of Another Bullshit Night in Suck City)
“OMG I love this!! It’s so Russian - very reminiscent of the Chekhov story Complaint Book (entries in a complaint book at the railway station).” (Elif Batuman, author of The Possessed)

What listeners say about Jeff, One Lonely Guy