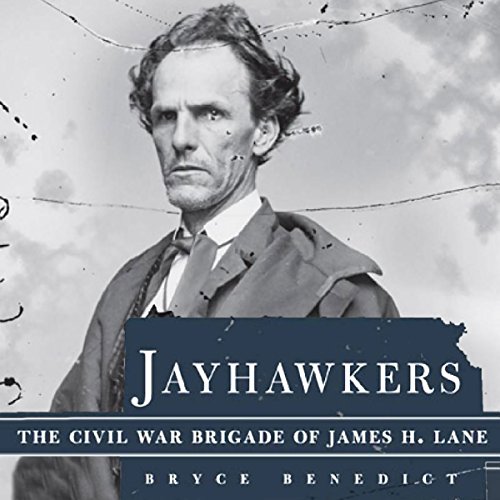 By: Bryce Benedict
Narrated by: Michael Hanko
Try for $0.00

No person excited greater emotion in Kansas than James Henry Lane, the US senator who led a volunteer brigade in 1861-1862. In fighting numerous skirmishes, liberating hundreds of slaves, burning portions of four towns, and murdering half a dozen men, Lane and his brigade garnered national attention as the saviors of Kansas and the terror of Missouri.

This first book-length study of the “jayhawkers”, as the men of Lane’s brigade were known, takes a fresh look at their exploits and notoriety. Bryce Benedict draws on a wealth of previously unexploited sources, including letters by brigade members, to dramatically re-create the violence along the Kansas-Missouri border and challenge some of the time-honored depictions of Lane’s unit as bloodthirsty and indiscriminately violent.

Bringing to life an era of guerillas, bushwhackers, and slave stealers, Jayhawkers also describes how Lane’s brigade was organized and equipped and provides details regarding staff and casualties. Assessing the extent to which the jayhawkers followed accepted rules of warfare, Benedict argues that Lane set a precedent for the Union Army’s eventual adoption of “hard” tactics toward civilians.

An entertaining story rich in detail, Jayhawkers will captivate scholars and history enthusiasts as it sheds new light on the unfettered violence on this western fringe of the Civil War.

"Bruce Benedict brings Lane and his legendary Kansas Jayhawks to life in this exciting new book." (Thomas Goodrich, author of War to the Knife: Bleeding Kansas, 1854-1861)

What listeners say about Jayhawkers

This book helped me clarify some names I am familiar with but did not really know what they meant. The two key ones were Jayhawker and bushwhackers. The Jayhawkers opposed slavery and wanted Kansas to be a free state. The other is Bushwhackers wanted Kansas to be a slave state. Most of the Bushwhackers were from Missouri. War broke out between these two groups known as the Bleeding Kansas War. After the start of the Civil War, these two-groups kept fighting.

This is a brief biography of James Henry Lane, one of the first U.S. Senators from Kansas. Lincoln made him a General and he led the Jayhawkers who were now Union soldiers in defending Kansas. They faced primarily the former Bushwhackers led by Confederate General Sterling Price. The time frame is from 1861 to 1862.

The book is well written and researched. I understand the book format contains lots of photographs. I found this book most helpful in explained the conflict between Kansas and Missouri and the terms used at the time.

The book is nine hours. Michael Hanko does a good job narrating the book. I understand that Hanko is new to the field or audiobook narration. He is a voice-over artist.