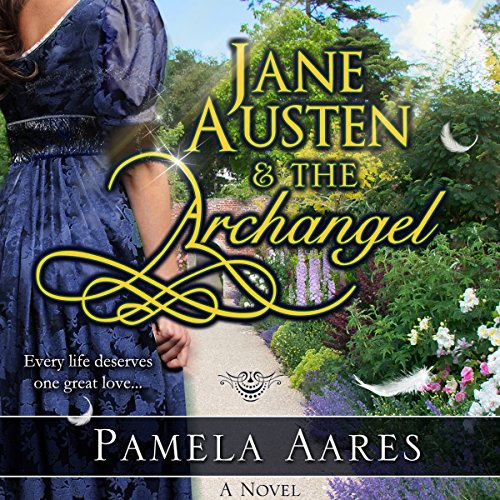 Jane Austen and the Archangel

By: Pamela Aares
Narrated by: Elizabeth Jasicki
Length: 6 hrs and 27 mins
Categories: Fiction, Historical
3.5 out of 5 stars 3.7 (14 ratings)
This title is included in Audible Escape

Jane Austen and the Archangel

"Listeners will wish that divine intervention could keep this book from ending." (AudioFile Magazine), review of Jane Austen and the Archangel.

Until then passion had only lived on the page...

Jane Austen hasn't written a creative word in months. She secretly fears she may not have it in her to write a single word more about love. Yet when the mysterious Michael Grace appears on her doorstep, she's cast into a world of emotion beyond even her wildest imaginings. Though she fears he might be a spy, she enlists his help to find her friend's fiancé, missing in the Peninsular War. But Michael isn't what he seems, and the passion and doubts he ignites turn everything Jane trusts upside down. What Jane doesn't know is that her mystery man is an angel. One who's never failed to get what he goes after.

Some rules just beg to be broken....

It's not easy being a bad-boy angel and Michael is paying the penalty. Demoted to working undercover in a sleepy English village, he's chafing to launch the dangerous mission he's been sent to command. But when he meets Jane, he's irresistibly drawn to her, even though involvement with her could jeopardize her life and his status as an angel.

When Lucifer tries to use Jane as a pawn in his vile schemes, Michael discovers that fighting the forces of darkness is nothing compared to the challenge of telling Jane the truth. Can the angel who's never lost a battle win the heart of a woman who's afraid of love?

Elizabeth Jasicki's luscious voice, slow delivery, and perfect upper-class English accent converge to make this clever and romantic story, the first in a series, a heavenly experience. Bad boy Archangel Michael, best known for slaying dragons, is sent to a sleepy village in England to help in the war effort. His arrival puts him squarely in the path of Jane Austen, who is having writer's block after her success with Pride and Prejudice. Jasicki mesmerizes, giving just the right amount of manly appeal to the charming Michael and just the right amount of spunk to the clever Jane. Listeners will wish that divine intervention could keep this book from ending. ( AudioFile Magazine)

What did you love best about Jane Austen and the Archangel?

A fresh, passionate, poignant behind-the-scenes look at Jane Austen that will have you falling in love with her all over again. But be warned: Archangel Michael will steal your heart

What does Elizabeth Jasicki bring to the story that you wouldn’t experience if you just read the book?

Elizabeth is a broadway actor with a heart and voice for the power and wit of this heart grabbing, fresh story

Every life deserves one great love!

I did like this story and I give top marks to the narrator. However, the story itself, while enjoyable, was quite slow. That is the only reason I didn't give it five stars.