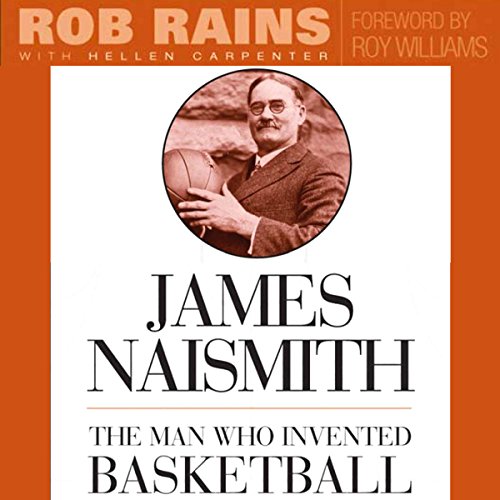 By: Rob Rains,Hellen Carpenter
Narrated by: Kenneth Campbell
Try for $0.00

It seems unlikely that James Naismith, who grew up playing "Duck on the Rock" in the rural community of Almonte, Canada, would invent one of America's most popular sports. But Rob Rains and Hellen Carpenter's fascinating, in-depth biography James Naismith: The Man Who Invented Basketball shows how this young man - who wanted to be a medical doctor, or if not that, a minister (in fact, he was both) - came to create a game that has endured for over a century.

James Naismith reveals how Naismith invented basketball in part to find an indoor activity to occupy students in the winter months. When he realized that the key to his game was that men could not run with the ball, and that throwing and jumping would eliminate the roughness of force, he was on to something.

And while Naismith thought that other sports provided better exercise, he was pleased to create a game that "anyone could play". With unprecedented access to the Naismith archives and documents, Rains and Carpenter chronicle how Naismith developed the 13 rules of basketball, coached the game at the University of Kansas - establishing college basketball in the process - and was honored for his work at the 1936 Olympic games in Berlin.

"Heartwarming study of the man who invented one of our most popular games... In addition to its broad appeal to basketball aficionados, this would be an excellent addition to all local libraries seeking to enhance their biography section as well as their sports collection." ( Library Journal)
"Sportswriter Rob Rains teamed up with the legendary coach's granddaughter Hellen Carpenter and gained access to a cache of Naismith's personal papers, making this biography a hugely valuable addition to our understanding of the sport's earliest days." ( The Washington Post)

What listeners say about James Naismith

This was a fun listen. I knew the basics: that James Naismith had invented basketball in the 1890s to give his students at the YMCA an indoor sport to play in the winter. But this book provided me with a lot more information about how the game came into existence and how it grew and changed in those very early years. It should be of interest to anyone who likes basketball or sports history. Naismith himself, although evidently a very good and intelligent man, doesn't come across as especially fascinating. Indeed, as it turns out, he didn't care for most of the innovations and the competitiveness which most people love about basketball today. He was a very proper, very religious late Victorian gentleman. I imagine he would be shocked by the game today. As a result, the portion of the book about his life after the game was invented is less interesting. Still, basketball fans owe Naismith a huge debt, and if you are at all interested in how the game came to be, this book is worth a listen.

A great man and a great game

What made the experience of listening to James Naismith the most enjoyable?

Learning what kind of man he was and how selfless he lead his life. A true hero. The book flowed very well and kept your attention

Which character – as performed by Kenneth Campbell – was your favorite?

A great book to listen to.