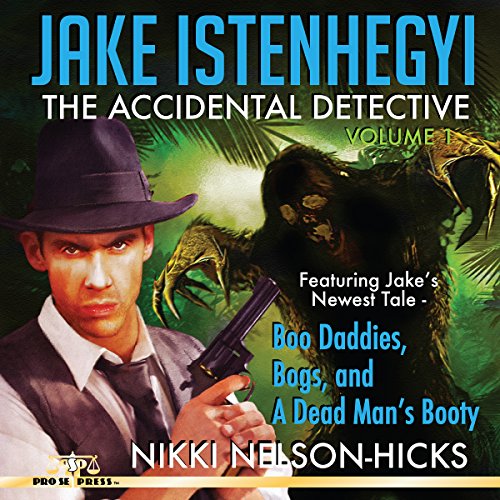 By: Nikki Nelson- Hicks
Narrated by: Ron Welch
Try for $0.00

Desperate to get out of his debt to the Odyssey Shop, Jake Istenhegyi answers a quirky classified ad: TREASURE HUNTERS WANTED. He signs on with a crew that is looking for the Cross of Trismegitus, a relic stolen by Pierre Rameau, the Pirate King of Honey Island and lost during the Battle of New Orleans.

According to legend, the Cross of Trismegitus holds a sliver of crystal called "Salt Vitam Aeternam"; The Salt of Eternal Life. This makes it more than just a pretty bauble to Istenhegyi. If it is a twin of the crystal that granted the Lombardi sisters immortality, he could use it to avoid their fate: turning to stone in a hundred years.

If it there is only a slim possibility that the Salt exists, he has to take that chance. Unfortunately, Jake doesn't know that waiting for him deep in the dark bayou is his oldest enemy. But first, Jake Istenhegyi has to cope with a surprise visit from home, clear his name for the murder of an Irish boxer, and continue the façade of Gunn Investigations, keeping the death of Bear Gunn a secret from Mama Effie and the mysterious owners of the Odyssey Shop.

Who knew what trouble could come from answering a simple classified ad? Find out in Jake Istenhegyi, The Accidental Detective, featuring the new digest novel Boo Daddies, Bogs and a Dead Man's Booty as well as the first two Accidental Detective stories - A Chick, a Dick, and a Witch Walk into a Barn and Golems, Goons, and Cold Stone Bitches. From Author Nikki Nelson-Hicks and Pro Se Productions.

What listeners say about Jake Istenhegyi: The Accidental Detective, Volume 1

If you could sum up Jake Istenhegyi: The Accidental Detective, Volume 1 in three words, what would they be?

My favorite character is Jake, because he is constantly surprising the reader. Even when you think he has no place to turn he he figures it out.

I really liked how he was able to change voices so often while keeping them consistent. He is very easy to understand and always has an uplifting voice.

I would definitely listen to more of this story and this narrator.

Be A Little Cautious

This title should have theoretically been right up my alley. I was looking for two elements: a) period detective action ala noir, and b) a supernatural element. The storyline delivered, but the money shot -- the initial horror reveal, was disturbingly graphic when read at two in the morning. It frankly put me off the rest of the story, and I've not finished it.

Do you think Jake Istenhegyi: The Accidental Detective, Volume 1 needs a follow-up book? Why or why not?

The character shows promise, but I'd be leery of another read if it plays out like this one.