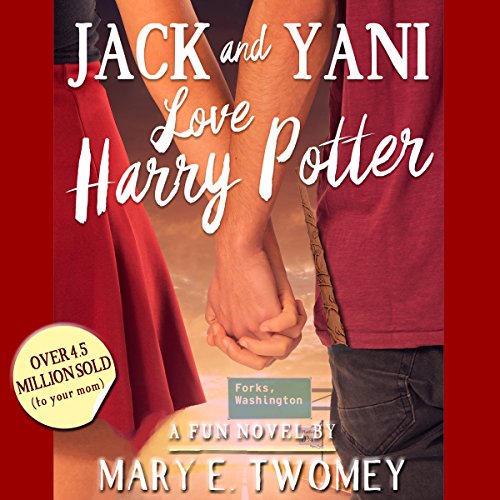 Best friends Jack and Yani do everything together. After Yani's 30th birthday party, however, she decides to leave town on a spontaneous vacation to visit all the sites of the young adult fiction novels she loves, hoping that when she returns, she'll have buried the secret flame she has for Jack.

Forced by his friends to go on a road trip to track down Yani, Jack learns a lot about his best friend by reading the novels she's been obsessed with. From vampire hunting in Forks to searching for wizards in Florida, Jack confronts his greatest fears - that he just might love Harry Potter...and perhaps, Yani.

Would you try another book from Mary E. Twomey and/or Jason Lovett?

Have you listened to any of Jason Lovett’s other performances before? How does this one compare?

I don't think so.

Did Jack and Yani Love Harry Potter inspire you to do anything?

I think this book sold it self by using the Harry potter name but there was very little mention of Harry Potter in the book there were more references to The Twilight books. If you are thinking of reading this because you, like Yani and Jack love Harry Potter... Don't!

Simply Atrocious. I could not finish it.

A reader who understood inflection, timing, and emotion. Also, an editor to fix the horrible excess of adverbs.

What could Mary E. Twomey have done to make this a more enjoyable book for you?

Hire an experienced and honest editor! There were so many ridiculous characters who had no business existing in this book. They all sounded exactly alike; there was no effort to make the characters have their own personalities (amongst the secondary characters). Also, the pacing was horrific. Several long passages could have been cut (entire chapters!) and it would have only improved the story. There was no discernible reason for the long conversations between the secondary characters about disgusting food on YouTube or Big Carl's bragging or the fact that Chrissy likes to change her name all the time. About that... why would you introduce a character (in a cast of way too many) and THEN, just to make sure your audience stays confused, make her name change every 50 pages?

Also, heads up... no way can you decide to attend San Diego Comic Con on a whim three days before it starts. No. Way. That smacked of unrealistic tripe that would only serve to annoy the target audience of this book (ie: book and film geeks).

Would you be willing to try another one of Jason Lovett’s performances?

What character would you cut from Jack and Yani Love Harry Potter?

Dan, Frank, Chrissy, Big Carl, Stace... pretty much ANY of the "life long friends" who appear at the opening birthday party and subsequent road trip. Who in the world consents to take some random (Big Carl) on a momentous and drawn out car trip across the country with someone's annoying cousin? Seriously. These characters are supposed to be adults... someone should have objected to his presence.

The only keeper in the bunch is Nate. The twin sister (REALLY? How did we get to Chapter 10 without hearing that Yani had a flippin' twin sister? So trite.) was okay.

The premise of this story is what made me decide to purchase it. Sadly, the execution fell so short of my expectations. Firstly, the main characters are 30. That just made the YA obsession feel creepy (and this is from a 30+ woman with a YA obsession). There was something sad and pathetic about it. Had the author been better able to frame her characters and give them life (and not just barely-amusing banter), I would have related to them. As it is, a grown woman on a solitary freak out trip to Forks to eat the same meal Bella ate in the Twilight movie? Cringe-inducing.And what is with the random candy bar blog? It was distracting and added nothing to the plot. The "bickering" between Jack and Yani fell flat to me. There was no sexual tension, no passion that told me they were harboring secret love for one another. Jack's out-of-nowhere jealousy at Yani's party was shocking to me (and not in a good way). Sure, I knew that's where we were headed, but there was NO appropriate hints or suggestions that the two were anything more than best friends with no boundaries.I finally stopped listening to this (congratulations, I've never abandoned a book mid-listen before) when I decided my time was more valuable than what I was hearing. I am sorry I spent a credit on this book. Very sorry, indeed.