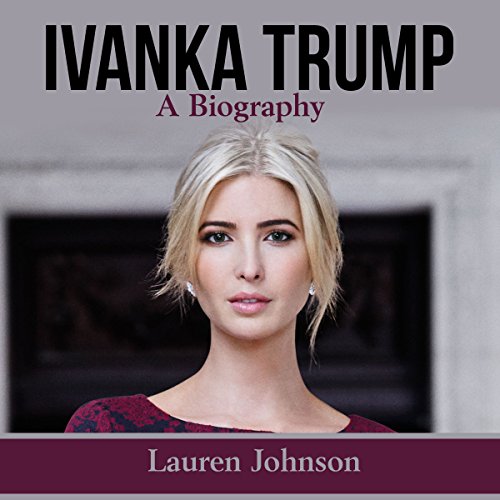 By: Lauren Johnson
Narrated by: Jae Huff
Try for $0.00

Ivanka Trump is an American businesswoman and former fashion model who is currently assistant to President Donald Trump. She is the daughter of the president and his first wife, former model Ivana Trump.

Trump has been an executive vice president of her father's company - The Trump Organization - as well as serving as a boardroom advisor on her father's TV show The Apprentice. She moved to Washington, DC in January 2017 as her husband, Jared Kushner, was appointed as a Senior Advisor to the President of the United States by her father.

Starting in late March 2017, Trump began serving in her father's administration as assistant to the president. She assumed this official, unpaid federal government position after multiple ethics concerns were raised about her access to sensitive material while not being held to the same ethics restrictions as a federal employee. She is considered part of her father's inner circle.

What listeners say about Ivanka Trump: A Biography

HOW IS THIS EVEN CONSIDERED A BOOK?

I can’t even fathom how this made it to audible! Nor, can I imagine how a fifteen minute broad recap of Ivanka Trump’s life is considered a book. Beyond disappointed in Audible for peddling this paragraph as a “one credit book”. I wouldn’t have paid fifteen cents much less fifteen dollars!