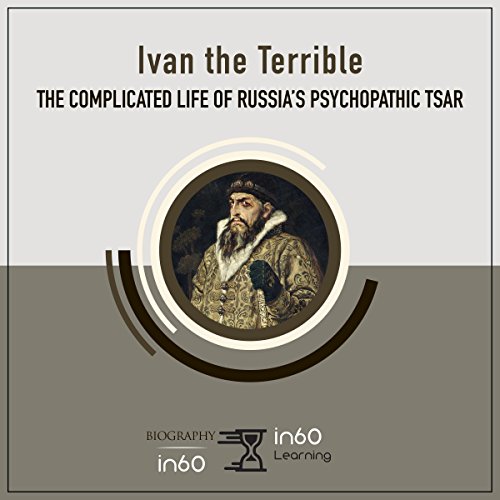 Get smarter in just 60 minutes with in60Learning. Concise and elegantly written non-fiction books and audiobooks help you learn the core subject matter in 20% of the time that it takes to read a typical book. Life is short, so explore a multitude of fascinating historical, biographical, scientific, political, and financial topics in only an hour each.

With a name like Ivan the Terrible, it comes as no surprise that historians consider this Russian Tsar a psychopath. Yet Ivan’s personality consisted of many dualities. He channeled the Medieval era as he committed mass murder, but he also reformed Russia, centralizing it and bringing it into the Renaissance. He liked to torture animals, but he could also be found in church, banging his head in repentance until it bled. This introduction to his life explores the legacy he was born into and deftly contextualizes his cruelty within the era and culture of his rule.

What listeners say about Ivan the Terrible

Ivan was being treated with mercury common in those days can that be called psychopathy?

Ivan the Terrible: The Complicated Life of Russia’s Psychopathic Tsar
Probably in60learning's best audio book. Packed full of little known facts and insights into history.
A great short history.
I was given a free copy of this audiobook at my own request, and voluntarily leave this review.

Don’t let his name fool you.

Ok. The dude was pretty terrible, but do you know why? Or what he did that was so terrible? Then you owe it to yourself to educate yourself on this imposing historical figure which shaped the face of Russia for generations to come. Great information well organized and grippingly told. The narrator did a first rate job too!

enjoyed it, it was insightful

This was insightful and enjoyed getting to know a little more about Ivan as it's been years since I read anything of him. I dropped 1 star because on two occasions an audio segment repeated itself which I attribute to error in editing.