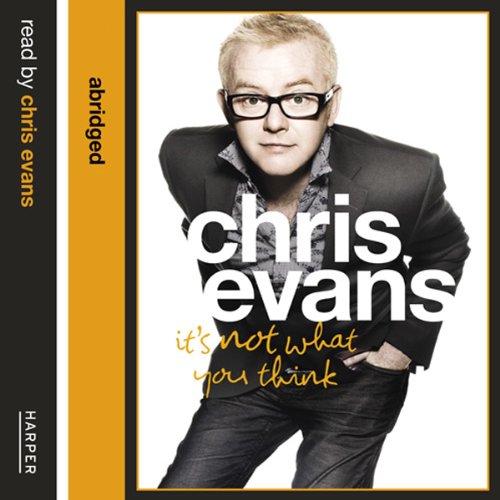 It's Not What You Think

The story of how one council estate lad made good, really very good, and survived - just about - to tell the tale....

Chris Evans' extraordinary career has seen him become one of the country's most successful broadcasters and producers and a well-known face in his own right. From his early years on Manchester's Piccadilly radio to Don't Forget Your Toothbrush, The Big Breakfast, and TFI Friday for Channel 4, Chris changed the TV landscape during the '90s. And on BBC Radio 1's Breakfast show and as owner of Virgin Radio, he ushered in the age of the celebrity DJ. His relentless pursuit of success and subversive style were his trademarks.

But then the 'Chris Evans show' and Chris Evans' life became frighteningly interchangeable. The more outlandish the antics, whether on or off screen or air, the better. The celebrity girlfriends and the nights out drinking. Rolling into work late with 7m listeners waiting. For someone who took such pride in his work, what had happened? The country loved him, but what did Chris love? He'd achieved more than any kid who'd left school at 16 with a couple of O'Levels could have dreamed of. So why wasn't he happy?

Chris Evans' autobiography will be an honest and revealing story of how a boy from a Warrington council estate who started work at 13 and held down 20 different jobs by the time he left school became the most widely acclaimed broadcaster of his generation.

From the early death of his father that literally set him to work, to his brief and much publicised marriage to Billie Piper, he will talk frankly about the highs and lows of his, at times, turbulent career and how his drive to succeed impacted his personal life. This will be a fascinating and surprising life story from one of Britain's brightest and boldest pe...

What listeners say about It's Not What You Think

Chris Evans himself in amazing form. For some reason or other I have missed out on listening and viewing Chris over the years. This does not hinder the enjoyment of listening to his amazing background and successes, as well as quite a few screw ups!

Will immediately down load his next book.

Where does It's Not What You Think rank among all the audiobooks you’ve listened to so far?

This is one of my top 10 books

Chris Evans himself, he is honest, humble and has a great sense of humor

What does Chris Evans bring to the story that you wouldn’t experience if you just read the book?

Everything, the true geniuneness of it all

I was captivated, smiled all the time!!! Some text were deeper tham others, Chris really understands how to share simple things in live with the listener

Chris is one of my hero's and a great inspiration

Liked it but it stops in a weird place

A really good listen. Chris Evans is engaging and you really sypathise with him while he describes some of the tough points of his life.

My only complaint is that the book is abridged - you're only really getting the first half or so of the book. Just when it sounds like you're reaching the pinnacle of the Evan years, it's wrapped up a little too quickly to avoid having to record more audio. Did Chris Evans record the other half to release later - or will I have to read the hardcopy?

It isn't what you think!

As The great author Mark Twain put it, ?No-one is more qualified to write their own story then themselves?, something which when it comes to audio books also applies to the author also reading the book. There?s something so much more engaging about it when the subject matter itself is, so to speak, talking to you, conveying the historical majesty of the moment, adding the emphasis where necessary and getting the tone just right for each situation being recounted.

As a fan of autobiographies, and a far bigger admirer of Chris Evans, I hopped straight onto Audible.co.uk to purchase his new book, the very second their e-mail dropped into my inbox advertising the very same.

What to say about the book, a master piece, Chris Evans is one of the UK?s presenting genius?s, a true master at work. Sure there have been others, but Chris for me has always managed to entertain and keep things fresh in all his endeavours. His book is a fascinating account into what made him, how the events of his life shaped him and how these mixed together to mould the person to whom he is today. A reflection on his mistakes and the most sincere and honest bit of writing I?ve listened to in a while

I was laughing almost the whole way through; Chris sure can tell a good story, and his own story ? even better than any other. It?s full of memories and tit-bits of advice on life and various experiences we?ll all be able to empathise with. It?s a heart warming, genuine and honest look back on his life that not only made me smile and feel a connection with Chris, but mixed in for good measure is some good, solid, sturdy advice to all of us.

The title sums up the content perfectly, it quite seriously isn?t what you think it will be, and my only one criticism would be the end. I felt there was more to say, I won?t spoil it for you, you?ll have to read it, and it is a fantastic read, and even better listen, but Chris if you?re reading over this, can we please have a part two dear chap?

really excellent, i just wish it was unabridged. I like many was guilty of thinking Chris got a break and became an overnight sensation on big breakfast. WRONG........

Really fantastic story of a guy who worked rellentlesly to achieve his dream of radio stardom, unlike other biogs i quite enjoy listening to the mad follys and spending sprees he has as he is up front about it all.

All i want from a biog is honesty and this one delivers.

Its very funny too.

Chris Evan's patronising and insincere reading style killed this for me. Couldn't get past the first 30 mins.

Its not what you think

What a great Listen and the Narration is even greater to Listen to. The Order in which this book is placed into is easy to follow and understanding on how Chris lived his life is fascinating to say the least. The best thing about this book is that its easy to understand and i just loved the Top 10`s. Enjoy.

I arrived in the UK from New Zealand in 2000 so I missed most of Chris Evans' early story. I only bought this audio book because I saw Evans on Jonathan Ross and liked the guy. It's a great listen, a great story and it's narrated superbly. It is also the first audio book I've not been able to follow on my ipod's "Faster" playback speed - Evan's just talks to fast to keep up.

What made the experience of listening to It's Not What You Think the most enjoyable?

Chris' narration was excellent & honest. He criticises himself & his behaviour but the book really gives an insight into his drive, ambition & keys to his success. The only issue is it finishes as he completes the deal to buy Virgin Radio. There are limited mentions of his times with Gazza, Danny Baker etc. What happened after Virgin Radio is missing - please finish this off Chris!

I hesitated listening, but its brilliant !

Would you consider the audio edition of It's Not What You Think to be better than the print version?

Chris Evans narration simply brings the bok to life in a way that print couldnt. A great listen

Chris Evans has style, we all know that from the media, but has he got substance. Definiteley yes. what a surprising read, totally engaging, informative and funny. He is a living example of positivity ! inspiring and thought provoking.. worth the listen ten times over

Which character – as performed by Chris Evans – was your favourite?

I wish I had the time ! - I would have done. I found myself listening any moment I could find

In the top ten best audiobooks ever!

I'm wasn't a huge fan of Chris Evans and bought this because I used to love the Big Breakfast when it was on. I'll cut to the chase. This is a perfect audio autobiography- right up there with Michael McIntyre's truly hilarious and very moving offering (notable mention to Gok Wan too:-)). From the outset Chris completely draws the listener in- not only because as an established DJ he obviously reads well- also and more importantly because he tells his life story in such an involving and interesting way. Chris's real talent is that he totally gets the balance between the three major modalilties of visual, auditory and kinesthetic. And he is a fan of Lao Tzu. Enough said. Except- it's not what you think!