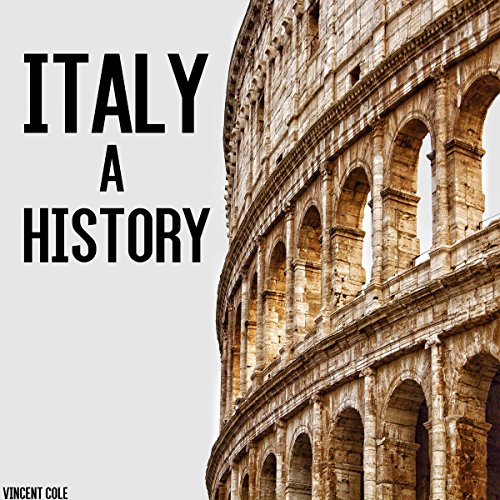 By: Vincent Cole
Narrated by: Matthew Lea-Wilson
Try for $0.00

The history of Italy begins with the arrival of the first hominins 850,000 years ago at Monte Poggiolo. Italy shows evidence of habitation by anatomically modern humans beginning about 43,000 years ago. It is reached by the Neolithic as early as 6000-5500 BC as evidenced by Cardium pottery and impressed ware.

The Italian Bronze Age begins around 1500 BC, likely corresponding to the arrival of Indo-European speakers, whose descendants would become the Italic peoples of the Iron Age; alongside the early Italic cultures, however, the Etruscan civilization in central Italy, Celts in northern Italy, and Greek colonies in the South flourished during the 8th to 5th centuries BC.

What listeners say about Italy: A History

RUN! I'm pretty sure this is a C-Student's end-of-year college paper on Italy just read aloud to cover beer money. The writing is hot garbage, with passive voice all over the place, annoying overuse of the word "whilst" (to sound smart?), and a bunch of dangling end-clauses that go nowhere and leave you as confused as the narrator, who's trying to wade through this steaming mess.

Speaking of the narrator, where in Bumpkinland did they find this bro? Who narrates a book on Italy and can't pronounce "Medici", "Genoa", or "Tuscan" (which he promounces like "Tucson, AZ). And these are the layups. You can only imagine what he does with pronounciations of regions like "Emilia Romagna" and "Savoy Annecy". Cue the Sarah McLaughlin puppy commercial music.

I'm not being a snob here. I hope you can tell by my tone that that's not how I roll. I'm saying that if you don't know much about Italy, you listen to this, and you go around saying place names like this dude teaches you, you will sound like an Idiot. An idiot abroad, in America, everywhere in the world.

Definitely the worst thing I've ever seen for sale on Audible. Definitely will be asking for my money back. One Star because Zero Stars impossible to leave. Also One Star because it's earned a star for being so bad that it's slightly hilarious.

Okay for what it is

This book does a decent job of hitting the highlights of Italian history in half an hour. Essentially, it's an outline or even a table of contents for a more comprehensive study. The reader mispronounced some proper names so badly that it required effort to figure out what he was trying to say. That's just careless on the part of the director, when audio of the correct pronunciation is so easily available on Google.

Good summary of Italian history, but pronunciation of italian names is ridiculous! If you're Italian, brace yourself.