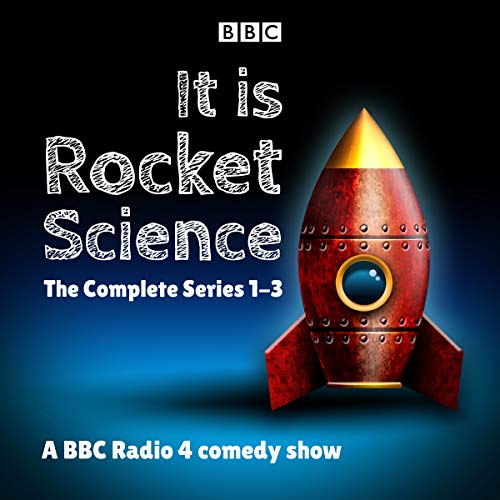 It Is Rocket Science: The Complete Series 1-3

Helen Keen, Peter Serafinowicz and Susy Kane star in this funny, offbeat but factual expedition through the universe, boldly going where no Radio 4 comedy show has gone before.

This 'shamelessly nerdy...deeply silly' (Radio Times) space extravaganza features fewer close-ups of Professor Brian Cox looking cool in front of a rocket than Wonders of the Universe but more weird, wonderful and occasionally woeful stories about the geniuses, Nazis and Satanists who plotted to propel humankind to the stars. Find out the many and varied ways to leave the planet as It Is Rocket Science takes you on a 'gleefully irreverent' (The Scotsman) whistle-stop comic tour of the Great Brains who put monkeys, ladies, dogs and gentlemen into orbit.

Discover the daring Mercury 13 women - the astronauts and moonwalkers that never were; hear the adventures of Felix the French Space Cat; raise your eyebrows at the career trajectory of Wernher von Braun, from Nazi to Disney to NASA; meet the man who (metaphorically) connects rocket fuel to Aleister Crowley; explore your options in case an asteroid is heading directly your way; and discover some of the more surprising suggestions scientists have advanced for how to get in touch with life on other planets, from giant burning parallelograms in the Sahara to sending nude pictures into space....

Audio files have been updated as of January 2019.

What listeners say about It Is Rocket Science: The Complete Series 1-3

Not the complete series 1-3

The entirety of series 3 is missing from this purchase. I have tried downloading by all the various combinations of download settings with the same result,

Really enjoyed the factual side of this audiobook but on more than one occasion I nearly had to quit. The comedy element is forced and I didn’t find any of it funny. Sorry. Helen’s voice is incessantly annoying. The gags are terrible and the audience laughter has to be added I’m sure.

I had not idea rocket science could be so funny! This is a keeper, I'll be listening to it again.

Very informative, but wish I found it funnier.

Loved Infinite Monkey Cage, so thought this woulld be worth a try. There are loads of interesting stories in It Is Rocket Science and I'm very happy with purchasing it as I listened with interest. However, I just didn't find myself finding many of the jokes funny.

An irreverent fun look at the science of space.

An hilarious look at scientific achievements in space travel,with a brilliantly funny comical commentary throughout.