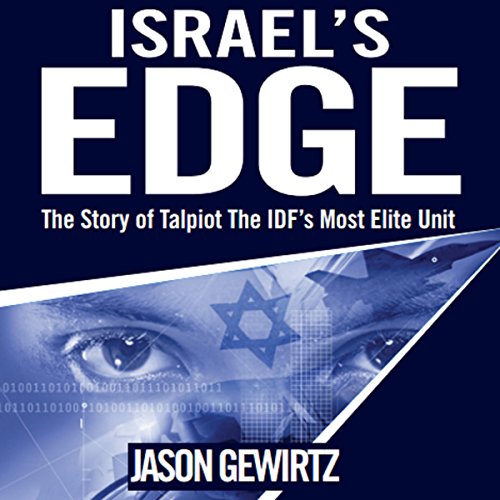 By: Jason Gewirtz
Narrated by: Shlomo Zacks
Try for $0.00

How will Israel keep its strategic edge over an increasingly dangerous Iran? Israel has been preparing for this day by creating a special and secretive IDF unit called Talpiot.

Instead of being trained to fight, the few soldiers each year selected for Talpiot are taught how to think. In order to join this unit they have to commit to being in the army for 10 years, rather than the three years a normal soldier serves.

Talpiots are taught advanced level physics, math, and computer science as they train with soldiers from every other branch of the IDF. The result: young men and women become research and development machines. Talpiots have developed battle ready weapons that only Israel's top military officers and political leaders know about. They have also dramatically improved many of the weapons already in Israel's arsenal.

Talpiot has been tasked with keeping Israel a generation ahead of a rapidly strengthening and technologically capable Iran. Talpiots contribute to all of the areas that will be most important to the IDF as Iran becomes even more powerful including missile technology, anti-missile defense, cyber-warfare, intelligence, satellite technology and high powered imaging. Talpiot soldiers have also been a major factor in the never ending fight against Israel's other enemies and many have left the R&D lab to fly fighter planes, serve in the field as commanders of elite army ground units and at sea commanding Israel's fleet of naval ships.

After leaving the army, Talpiots have become a major force in the Israeli economy, developing some of Israel's most famous and powerful companies.

Israel's Edge contains dozens of interviews with Talpiot graduates and some of the early founders of the program. It explains Talpiot's highly successful recruiting methods and discloses many of the secrets of the program's success.

What listeners say about Israel's Edge

Could have been shorter

While the story of the IDF's elite unit, Talpiot, is very interesting itself, the author spends too much time on too many of Talpiots graduates and what made them enlist. Many of the graduates of Talpiot go on to start brilliant careers and create wonderful companies but I was hoping the book would go into more of their IDF missions but it barely touched on them. Many of the Talpiot member's names, missions and inventions are well known inside the IDF but the author, due to security reasons, won't share many with the reader.
A short audio book at six hours could have been even shorter.
Narration is clear and easy on the ear.
I would have given more stars had the author been able to reveal more about Talpiot IDF missions, their incredible inventions and military hardware upgrades but we are left to use our imaginations.

As stated, this is an interesting subject but this book doesn't do much more than extol the amazing prowess of these apparently superhuman intellects who make up the Talpiot. Really, the whole book could be boiled down into about a fifth of the size and not lose anything. After the first few chapters, it becomes repetitious and predictable.
The elite divisions of the Israeli Defense Force are definitely a powerful and creative group, and they must of necessity live on the ragged edge of civilized society. There are very, very bad people out there and they have to always be one step ahead. As I have learned more about them, though, especially with the emergence of groups like Black Cube, NSO, and Pegasus, I definitely do not see them as the flawless guardians of freedom as they are so often portrayed.

This was a fantastic journey into the inner workings of Talpiot. I never knew it existed, but I often wondered how the Israelis were able to keep ahead of the curve when surrounded by their enemies. Now I know. Well done Jason Gewirtz. The hardest part in writing this was accessing those who know and gaining their confidence that in telling their story, you have not diminished in any way, the power, attraction, and valor of those who continue to vie for entrance into Israel's most elite corps.

Decent book if you have the interest

This was a decent book. I didn’t love it but listened to the whole thing. About half way through I had gotten the gist. After that it was a repeat of how topiat grads created one great company after another. Worth a read but not one of my favorites.

Really enjoyed this book. Makes you see what Israel has to go through to survive. Thank you