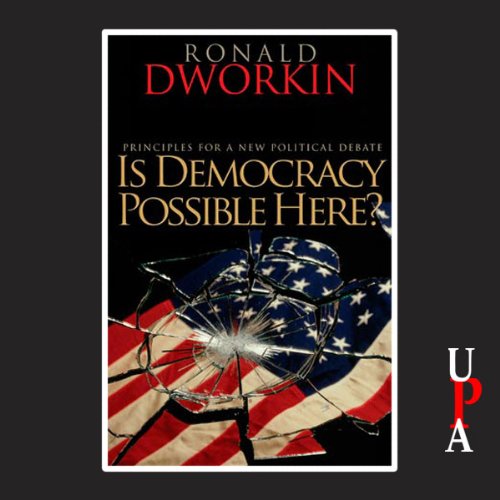 By: Ronald Dworkin
Narrated by: Michael Kramer
Try for $0.00

Politics in America are polarized and trivialized, perhaps as never before. In Congress, the media, and academic debate, opponents from right and left, the Red and the Blue, struggle against one another as if politics were contact sports played to the shouts of cheerleaders.

The result, Ronald Dworkin writes, is a deeply depressing political culture, as ill equipped for the perennial challenge of achieving social justice as for the emerging threats of terrorism. Can the hope for change be realized?

Dworkin, one of the world's leading legal and political philosophers, identifies and defends core principles of personal and political morality that all citizens can share. He shows that recognizing such shared principles can make substantial political argument possible and help replace contempt with mutual respect. Only then can the full promise of democracy be realized in America and elsewhere.

Dworkin lays out two core principles that citizens should share: first, that each human life is intrinsically and equally valuable and, second, that each person has an inalienable personal responsibility for identifying and realizing value in his or her own life. He then shows what fidelity to these principles would mean for human rights, the place of religion in public life, economic justice, and the character and value of democracy. Dworkin argues that liberal conclusions flow most naturally from these principles. Properly understood, they collide with the ambitions of religious conservatives, contemporary American tax and social policy, and much of the War on Terror. But his more basic aim is to convince Americans of all political stripes - as well as citizens of other nations with similar cultures - that they can and must defend their own convictions through their own interpretations of these shared values. The book is published by Princeton University Press.

"Argues that liberals and conservatives must realize that each camp is working for the same goal of a better nation... Dworkin's book deserves careful consideration and response." ( Publisher's Weekly)
"Of the season's books deploring the quality of our political discourse, the classiest is Ronald Dworkin's Is Democracy Possible Here?" (Michael Kinsley, The New York Times)

What listeners say about Is Democracy Possible Here?

Would you try another book from Ronald Dworkin and/or Michael Kramer?

What was most disappointing about Ronald Dworkin’s story?

No clear argument. So ideological that he can't even see that it is ideological. Dworkin takes it for granted that his perspective is correct simply because it is his. He does not seek arguments against his position and therefore makes no sound argument FOR his position. Considering he titled the book with a question, one expects a deliberated, clear and supported argument. I can't find it without extreme efforts toward bypassing his ideology to get to the meat.

Who would you have cast as narrator instead of Michael Kramer?

Mr. Kramer did a good narration EXCEPT for way too much hissing on his "s" sounds. For those who are affected by such white noise the way I am, he just puts you to sleep.

What character would you cut from Is Democracy Possible Here??

Though written by an American and geared to discussing the socio-political state of the USA the book nevertheless deals with basic principles of democracy and fairness in society and is pertinent to anybody who is interested in how they are governed and how society might be regulated to the general good of most of its citizens. The author is quite clear as to his more liberal political leanings, but tries to be fair in setting out the arguments from both sides of the political divide in the United States, viz., Democrats versus what he sees as the hard-right position of the Bush Administration, over such matters as welfare, abortion, gay marriage, taxation and what place, if any, religion should play in influencing the State. You'll like the book better if, like me, you were delighted when Barack Obama won the Presidential election.
I had to listen attentively to the recording as I'm not familiar with economic or philosophical theories, but the author sets out his arguments very succinctly and the narrator is good.

The manifesto of a modern Liberal

No other book, to my knowledge, and in my opinion, contains in so clear, and so insightful terms a modern formulation of Liberal theory, encompassing such wide ranging issues as political legitimacy, distributive justice, human rights, constitutional law and personal ethics. If, like me, you are a Liberal, you owe it to yourself to read or listen to this. If you're a Conservative, you owe it to yourself, if only to test the strength of your own ideals, and better understand the underlying ideas of your opponents.