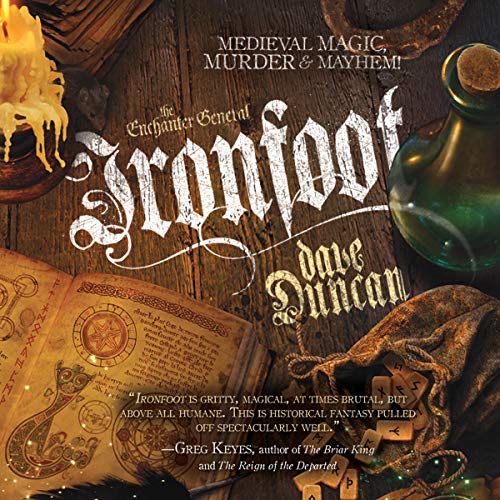 By: Dave Duncan
Narrated by: Tim Campbell
Try for $0.00

It is 1164, and for a hundred years England has been ruled by the Normans. A young Saxon boy named Durwin, crippled by a childhood accident, had caught the eye of a Norman sage teaching at a rural school of magic. Realizing that the boy had promise, Durwin was made stable boy, and eventually allowed to attend classes.

Now twenty, Durwin is proficient enough that he is assigned to teach, but the other sages refuse to promote him and he is hassled by the Norman juniors for his disability. But those troubles turn out to be the least of his worries when he manages to corrects errors in an ancient corrupted spell, which promptly prophesies murder.

Sure enough, word soon reaches the school that one of the local count's house sage has died, perhaps slain by black magic. Durwin is whisked away to the family's castle, only to find that one death was only the beginning. The young sage quickly learns of a dizzying plot to assassinate King Henry. Dropped into the middle of the complex politics of England's royal courts, can Durwin stop them in time?

What listeners say about Ironfoot

Have hopefully​ a new series by Dave Duncan

Everything about this audiobook was exceptional. Dave Duncan is a master of great stories with humourous witty characters every historical fantasy writer should aspire to create.

Tim Campbell's​ performance takes this story from great to audible excellence. I would have gladly given 3 credits to match the value of this audiobook.

Have listened to this book over and over! Am so hoping there will be a sequel! Brilliant!