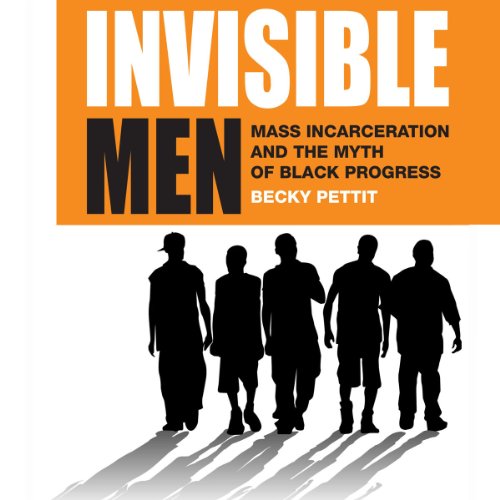 By: Becky Pettit
Narrated by: Denise Washington Blomberg
Try for $0.00

For African American men without a high school diploma, being in prison or jail is more common than being employed - a sobering reality that calls into question post-Civil Rights era social gains. Nearly 70 percent of young Black men will be imprisoned at some point in their lives, and poor Black men with low levels of education make up a disproportionate share of incarcerated Americans. In Invisible Men, sociologist Becky Pettit demonstrates another vexing fact of mass incarceration: most national surveys do not account for prison inmates, a fact that results in a misrepresentation of U.S. political, economic, and social conditions in general and Black progress in particular. Invisible Men provides an eye-opening examination of how mass incarceration has concealed decades of racial inequality.

Pettit marshals a wealth of evidence correlating the explosion in prison growth with the disappearance of millions of Black men into the American penal system. She shows that, because prison inmates are not included in most survey data, statistics that seemed to indicate a narrowing Black-white racial gap - on educational attainment, workforce participation, and earnings - and fail to capture persistent racial, economic, and social disadvantage among African Americans. Federal statistical agencies, including the U.S. Census Bureau, collect surprisingly little information about the incarcerated, and inmates are not included in household samples in national surveys. As a result, these men are invisible to most mainstream social institutions, lawmakers, and nearly all social science research that isn't directly related to crime or criminal justice. Since merely being counted poses such a challenge, inmates' lives - including their family background, the communities they come from, or what happens to them after incarceration - are even more rarely examined. And since correctional budgets provide primarily for housing and monitoring inmates, with little left over for job training or rehabilitation, a large population of young men are not only invisible to society while in prison but also ill-equipped to participate upon release.

Invisible Men provides a vital reality check for social researchers, lawmakers, and anyone who cares about racial equality. The book shows that more than a half century after the first civil rights legislation, the dismal fact of mass incarceration inflicts widespread and enduring damage by undermining the fair allocation of public resources and political representation, by depriving the children of inmates of their parents' economic and emotional participation, and, ultimately, by concealing African American disadvantage from public view.

What listeners say about Invisible Men

Could be structured in a more interesting manner, some areas seem redundant. Worth checking out.

A Lot of What We Already Know.... And so Much More

The author, Becky Petit, does an okay job of sharing with us the statistics, that in this case, show a dis-proportionality towards African Americans in particular (and to a lesser degree, Hispanic Americans).

I've studied these kind of social dynamics for years, and am very familiar with most of the things that were covered in this book. I still enjoyed the overall information that I gathered, in particular, some of the things I took note of were, the exponential growth of the penal system in America since the 70's, and the incarceration rates of people of color that are filling these jails/prisons to the point where they are bursting at the seams.

The author "borrowed" the title of this book from famed author, Ralph Ellison, and his book "Invisible Man", in which he says "I am invisible, understand, simply because people refuse to see me" – Ralph Ellison.

The author shares with us that in January 2009, 1.8 million people stood on the Mall in Washington to celebrate the inauguration of Pres. Barack Obama. The irony was, at that very same moment in time, 2.3 million Americans sat in American prisons and jails cells. Over half of them being African-Americans.

The United States incarceration rate is at a higher percentage of its population than at any other time during its history. The United States also leads the world in the highest percentage of its population behind bars. If we include the numbers of people on probation, parole and supervision, over 5.8 million people are in such circumstances. Current reports show that if the trends continue, one out of every three black men will spend some portion of their adult life in prison.

The author does do a great job in sharing with us the "historical overview" that is necessary in framing the discussion. She takes us back to the time of the Declaration of Independence, where Thomas Jefferson says that "all men are created equal, with an inalienable rights for the pursuit of liberty, freedom and happiness as governed by the laws of the land" (not an exact quote, but pretty close). Yet, at the same time the hypocrisy was that slaves were counted as 3/5 of a man for demographic and political purposes. Therefore rendering 40% of the African-American population "invisible". Those dynamics persist to this day, as blacks are still underrepresented, and given a disproportionate share and allocations, especially when it comes from federal/state assistance.

It is estimated that as of 2009, fully up to 5% of African-American men were not accounted for in the national statistics. The reasons vary from the legacy of slavery, not wanting to be tracked and traced, homelessness, incarcerations, etc.

These are just a few of the items that were shared with us in this book, and anyone with a "social conscience" will find this book intriguing and helpful, especially along with the historical overviews, as to how/why American penal systems continue to be bursting at the seams, disproportionately so with prisoners of color.

Incarcerating people, be it for petty or felony crimes, is only "a very small part of the overall puzzle" and needs to be coupled with "reentry into society programs, education and mentoring programs, job skill set training programs, mental health assistance, family dynamics, and so much more. We all have a lot to do in "getting our oars into the water" and will just have to keep pushing on to better solutions.