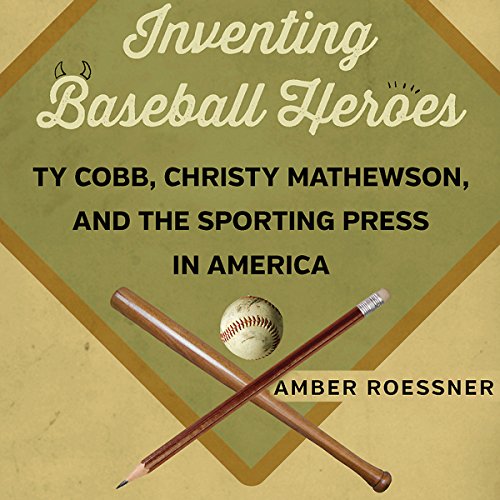 By: Amber Roessner
Narrated by: Pam Rossi
Try for $0.00

In Inventing Baseball Heroes, Amber Roessner examines "herocrafting" in sports journalism through an incisive analysis of the work surrounding two of baseball's most enduring personalities - Detroit Tigers outfielder Ty Cobb and New York Giants pitcher Christy Mathewson. While other scholars have demonstrated that the mythmakers of the Golden Age of Sports Writing (1920-1930) manufactured heroes out of baseball players for the mainstream media, Roessner probes further, with a penetrating look at how sportswriters compromised emerging professional standards of journalism as they crafted heroic tales that sought to teach American boys how to be successful players in the game of life.

Cobb and Mathewson, respectively stereotyped as the game's sinner and saint, helped shape their public images in the mainstream press through their relationship with four of the most prominent sports journalists of the time: Grantland Rice, FC Lane, Ring Lardner, and John N. Wheeler. Roessner traces the interactions between the athletes and the reporters, delving into newsgathering strategies as well as rapport-building techniques, and ultimately revealing an inherent tension in objective sports reporting in the era.

Inventing Baseball Heroes will be of interest to scholars of American history, sports history, cultural studies, and communication. Its interdisciplinary approach provides a broad understanding of the role sports journalists played in the production of American heroes.

"A wonderful book for anyone interested in the histories of the national pastime." ( Journalism History)