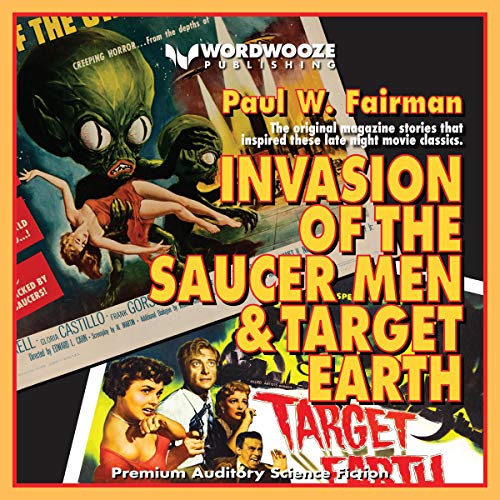 Paul W. Fairman (1916-1977) was the author of not one - but two stories for science fiction magazines that were later purchased and transformed into classic 1950s drive-in theater horror fare. Oddly both tales were published in the same year, 1953, two months apart. The first, "Deadly City" appeared in the March 1953 issue of Worlds of If, under Fairman's "Ivar Jorgensen" pseudonym; and was filmed as Target Earth (1954). The second, following closely on its heels, "The Cosmic Frame," was a featured story under his own byline in the May 1953 Amazing Stories; and was licensed twice, the first time under the title Invasion of the Saucer Men (1955), the second as The Eye Creatures (1965). Fairman was also the author of a story, "Brothers Beyond the Void" (the editor's title), chosen for dramatization on The Twilight Zone under the author's original title, "People re Alike All Over." All three appear in this unique anthology, which could be seen as the book equivalent of attending a drive-in double-feature, with a selected short subject as a bonus featurette.

This book was so good it took me back to fright night, the Saturday night movies all the great times as a child I watch sci-fi movies and love them. The three stories in this book hold up and hold your attention despite them being over 50 years old one of them was even turned in to a twilight zone episode. If you like all-time sci-fi or even cover the side by you’ll really like these books.