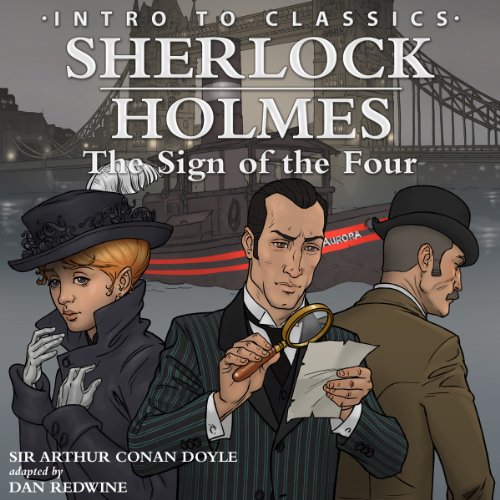 By: Arthur Conan Doyle
Narrated by: Zach Taylor
Try for $0.00

Miss Mary Morstan has received a single, valuable pearl every year on the same day for the last six years. The sender has remained anonymous - until now. This year, a note was included with the pearl: “Be at the third pillar from the left outside the Lyceum Theater at ten o'clock. If you are distrustful, bring two friends. You are a wronged woman, and you will have justice. Do not bring police. If you do, all will be lost. - Your unknown friend.”

Unsure of who to turn to, Miss Morstan makes her way to 221b Baker Street and asks Holmes and Watson for their help. Holmes is fascinated by the case, Watson is fascinated by the beautiful Miss Mary Morstan - of course both men agree to offer their assistance. But how could any of them know that the six pearls would lead them to a stolen treasure, a secret and deadly pact between four criminals, and two corrupt prison guards?

The Sign of the Four (1890) is the second novel written by Sir Arthur Conan Doyle featuring one of the most famous fictional characters of all times. Nation9's adaptation of this classic is part of the series Intro to Sherlock Holmes, an introduction for parents and children to timeless stories. Now your child can enjoy this fantastic adaptation in Nation9's digital book, featuring custom art.

What listeners say about Intro to Sherlock Holmes: The Sign of the Four

loved it and could not stop going. this book is perfect for people ages 14 and up